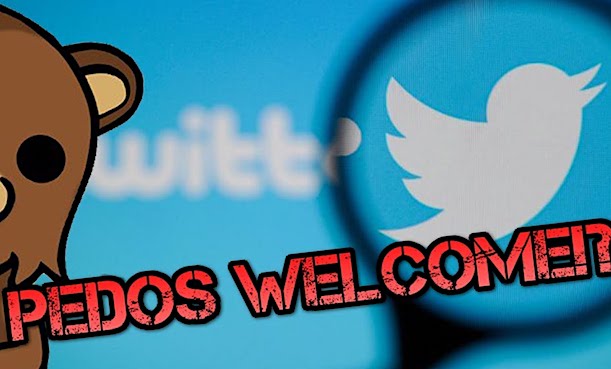 Twitter has changed its terms of service to explicitly allow for pedophile-type content on the platform, including discussions related to “attraction towards minors” and depictions of nude children, as long as they are “artistic”:

The new terms of service explicitly state, “Discussions related to child sexual exploitation as a phenomenon or attraction towards minors are permitted.”

The new rule adds (((gray legalistic language))) that content is allowed “provided they don’t promote or glorify child sexual exploitation in any way.”

Despite the qualifier, Twitter has stated it will allow for nude depictions of children on their platform as long as the images meet certain criteria including being “artistic.”

“Artistic depictions of nude minors in a non-sexualized context or setting may be permitted in a limited number of scenarios e.g., works by internationally renowned artists that feature minors,” states Twitter’s new rule.

Prominent pedophilia advocate Dr. James Cantor, who refers to pedophiles as “minor-attracted persons” or “MAPs“, has been pushing for Twitter to change its rules for years.

Last year, Dr. Cantor co-signed a letter to Twitter’s Director of Trust and Safety John Starr, urging Twitter to allow pedophiles safe access to its network and the ability to discuss their attraction to children on the social media platform.

Dr. Cantor was one of several academics to sign the letter which refers to “Virtuous Pedophiles” and argued that they should be allowed to network on Twitter.

The pedophile advocates claimed that if so-called “virtuous pedophiles” are not allowed to network on Twitter, they are more likely to sexually abuse children in the real world.

“In our professional opinions, terminating the accounts of non-offending, anti-contact MAPs is likely to result in the opposite effect of that which Twitter may expect or intend. Rather than reducing the incidence of child sexual abuse, if anything, it increases the risk that some pedophiles will be unable to obtain the peer or professional support that they may need in order to avoid offending behavior. It is also likely to increase the stigma and isolation associated with pedophilia and thereby increase the likelihood of some MAPs acting on their sexual feelings,” stated the letter.

So, in other words, the pedophile community is threatening to abuse more children if Twitter doesn’t allow them to use the platform to talk about abusing children.

We have previously reported on this Jewish creep, “Dr.” James Cantor, who is an expert in cloaking his perversions in pseudo-academic, pseudo-scientific jargon that Jews are the masters of.

Cantor and his minions belong in jail, not on Twitter, but if we learned anything from the recent Jeffrey Epstein scandal, pedophilia is being promoted by the wealthiest and most powerful people in the world, so it is going to eventually be legalized, in one form or another, whether we like it or not.

Recently, a Jewish man who was convicted of running an international child pornography ring was allowed to continue to practice as a pediatrician because the court ruled he did not pose a serious threat to children.

After all, goyim, just because you like to look at pictures and videos of naked children, doesn’t mean you want to “harm” them.

And Jews are, of course, at the vanguard of this pro-pedophile movement —  the U.S. Navy recently dedicated a ship to an infamous Jewish pedophile, Harvey Milk.

So-called “religious” Jews have gone so far as to block legislation that would protect victims of Jewish pedophiles.

But until pedophilia is legalized, Jewish pedophiles in America can always flee to Israel to escape prosecution — so much so that Israel is becoming an international “mecca” for Jewish pedophiles.