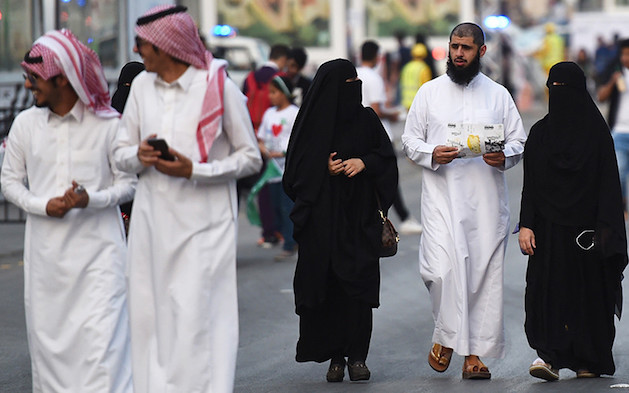 (RT – Russia Today) The Pentagon has withdrawn a “welcome booklet” which they had been distributing to American troops to help them better understand Saudi Arabian culture and history, which included the fact that the natives were mixed with “negro” blood:

Americans have never looked to the military as a bastion of social progressivism, but a training pamphlet distributed to soldiers in Saudi Arabia was so offensive the Pentagon has quietly removed it after a Netflix comedy special.

A June 2018 “welcome booklet” for US troops arriving in Saudi Arabia to train local forces bristles with casual racism disguised as amateur ethnography, including gems like “The population of [Saudi Arabia] is mainly composed of descendants of indigenous tribes that have inhabited the peninsula since prehistoric times with some later mixture of Negro blood from slaves imported from Africa.”

Muslim comedian Hasan Minhaj brought the pamphlet to the public’s attention in a recent Netflix special that clearly embarrassed the Pentagon enough to remove the pamphlet from their website – it’s no longer available except through the Google cache (really, CentCom, you didn’t think it was that easy to vanish from the internet, did you?).

The Saudi booklet is part of a long tradition of smug superiority in military training manuals, particularly where the Middle East is concerned. A booklet issued to US troops in Iraq during World War II warned soldiers to “keep away from mosques…if you try to enter one, you will be thrown out, probably with a severe beating” and to ignore “grown men walking hand in hand…they are not ‘queer’.” “Othering” the enemy is part of a long military tradition, and US wars have always been marked by pejorative terms for enemy combatants.

While there is plenty of useful information in the booklet – tips on etiquette, dress, and local customs go a long way toward helping foreigners adjust to life in an unfamiliar culture – some of it is just bizarre. Advice like “both the Arabian Gulf and Red Sea offer excellent opportunities for fishing, water skiing, sail boating, scuba diving, and snorkeling” makes the average American think twice about how their tax dollars are being spent, and the detailed chapter on how to bring one’s pet to Saudi Arabia is just weird.

The US has been arming and training Saudi troops for the kingdom’s proxy war against the Houthis in Yemen since 2015, despite mounting international outcry stemming from attacks on civilian targets like wedding parties and hospitals. The UN warned last week that fully half of all Yemenis now depend on food aid to live, while Saudi-led coalition forces have for months threatened to cut off traffic to the port of Hodeidah, where 80 percent of that aid is delivered.

Is the controversy over the concept or the language used?

While the Saudis might bristle at the idea that they are part Black, the fact of the matter is that they are — just one look at the average Arab reveals they are not only race-mixed, but that they are mixed with Black African blood.

The very term “arab” comes from the Hebrew meaning “to grow dark,” and one doesn’t grow dark by mixing with other Whites.

On top of that, there is credible historical evidence that the “royal” House of Saud is actually comprised of crypo-Jews who are pretending to be Muslims.

Technically, the royal family — despite being crypto-Jews — is also part Black because all Jews are also part Black, as is revealed by jewish hematologist A.E. Mourant in his book ‘The Genetics of Jews’ (Clarendon Press, 1978).

Perhaps the Pentagon should inform U.S. troops and diplomats who are visiting Israel that their hosts are also part “Negro” — or “shvartze” as they pejoratively say in Yiddish — but don’t hold your breath for that to happen.