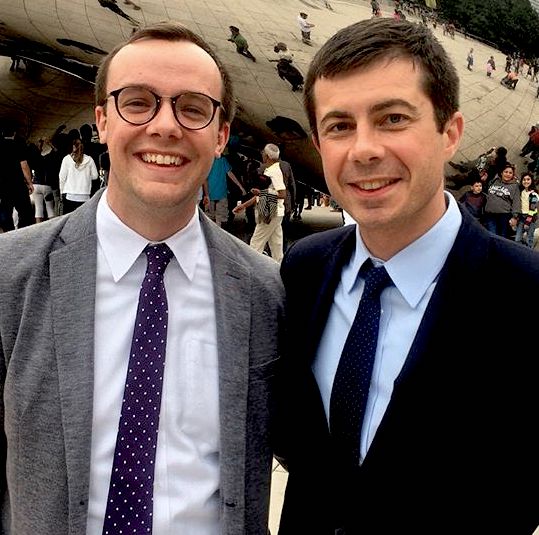 Openly homosexual presidential candidate Pete Buttigieg (pictured on right with ‘husband’) spoke at the LGBTQ Victory Fund’s annual brunch in Washington on Sunday, and described how he ‘reconciled’ his unnatural desire to engage in homosexual perversions with another man with his ‘close’ relationship with God:

“It’s hard to face the truth that there were times in my life when, if you had shown me exactly what it was inside me that made me gay, I would have cut it out with a knife,” Buttigieg said. “If you had offered me a pill to make me straight, I would’ve swallowed it before you had time to give me a sip of water.” Thankfully there was no knife or pill, he added, and now he understands believing there’s something wrong with being gay “puts you at war not only with yourself, but with your maker.”

“My marriage to Chasten has made me a better man — and yes, Mr. Vice President, it has moved me closer to God,” Buttigieg said. “And that’s the thing I wish the Mike Pences of the world would understand, that if you’ve got a problem with who I am, your problem is not with me. Your quarrel, sir, is with my creator.”

Pence is a conservative evangelical Christian who opposes same-sex marriage; Buttigieg’s Episcopalian. “It’s unusual for Democratic presidential candidates to talk about faith as often as Buttigieg does,” USA Today notes. “It’s groundbreaking that he uses his marriage to another man to illustrate his personal relationship with God.” The LGBTQ Victory Fund audience appeared appreciative of his Christian left beliefs, even if they don’t share them.

“He talked about God in a room that’s probably full of atheists — that’s what I am,” said Jack Jacobson. “He does it unabashedly and in a way that doesn’t come across as threatening, dismissive, or negative.”

As the Methodist theologian John Wesley once warned, “What one generation tolerates, the next generation will embrace.”  Ironically, his fellow Methodist adherents today largely support the gay ‘lifestyle’ and marriage.  The new tolerance for homosexuality which emerged from the American Bolshevik Revolution of the 1960s has now transformed into not only enthusiastically embracing homosexuality but also all forms of sexual deviance, including pedophilia.

Pete Buttigieg’s viable candidacy is merely the logical conclusion of this misguided tolerance of sexual deviancy.  Clearly, he is being groomed by the (((king makers))) to be among the Democratic front-runners for the 2024 presidential election.  The purpose of his appearance in this 2020 primary is to sell this openly homosexual politician as a moderate “Christian” candidate among the other liberal ‘extremists’.  Christians will be given the opportunity to prove to the world, and to God apparently, that they are no longer “homophobic” by voting Buttigieg into the White House.