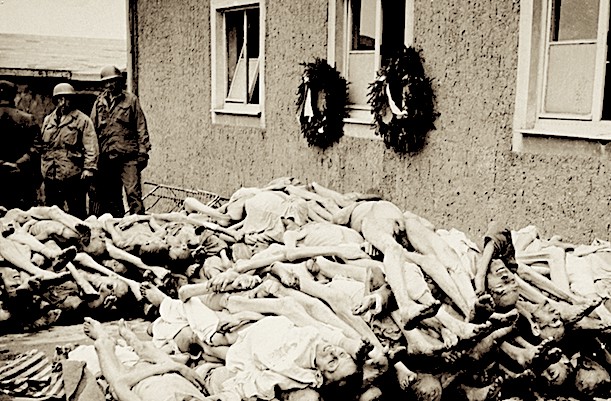 We are all familiar with the pictures and film footage of piles of dead “Jews” discovered at the liberated “death camps” Dachau and Buchenwald at the end of World War II, but what we were never told is that most of those corpses were actually dead German soldiers that were dumped there as part of an elaborate psy-op by British Intelligence, and many of those ghastly images were filmed by none other than horror film master, Alfred Hitchcock.

The following is an excerpt from the corroborated eye witness testimony of a captured German soldier:

In 1977, during a visit to New York and Cape May, I recounted the story of the trainload of dying German prisoners to two former US officers. They had both been stationed in Heidelberg shortly after the war and they knew all about it. They agreed that the cattle cars were filled with captured German soldiers who were infected with typhus and dysentery.

…On a sunny day in mid-June 1945, I hopped on a freight train and went to Erfurt. The train stopped about a kilometer and a half before the station, so I shouldered my rucksack and began walking toward the station. I soon noticed a freight train of about 20 cattle cars sitting on a side track. A bad odor was coming from that direction. As I came closer I saw hands protruding from ventilation holes and heard sounds of moaning, so I crossed several tracks and approached the cattle cars. The people inside noticed me and began crying “Water, comrade, water!” Then I reached the train and recognized the terrible stench of feces and rotting corpses. The sliding doors and ventilation holes were crisscrossed with barbed wire securely nailed. Urine and partially dried feces oozed from under the sliding doors and between the boards.

…They were in fact unwitting extras in a movie being made by Alfred Hitchcock, the Hollywood horror-film specialist. He had been awarded a contract to make a movie about concentration camps for the Nuremberg tribunal.

At night the dead prisoners would be unloaded at Buchenwald, Dachau and other concentration camps by those who were still alive. Hitchcock would then film them, depicting the heaps of corpses as victims of German atrocities. A large number of corpses were dumped at Buchenwald at night, and next day the citizens of Weimar were forced to walk past the heaps of rotting corpses and smell the sickening stench.

Some of them actually believed the American propaganda, that the corpses had been concentration-camp inmates. It was all filmed as part of Hitchcock’s movie. Afterwards the corpses were shoved into mass graves in the vicinity. That too was part of the script. This is the explanation that the two former officers of the US Army gave me concerning the trainload of dying German prisoners that I witnessed on June 16, 1945.

I certify that my testimony is a true account of what I myself have personally seen and experienced.

[Note: Alfred Hitchcock was persuaded by his friend and movie producer the British Jew, Sidney Bernstein, to leave Hollywood to assist on project “F3080.” F3080 was the name British Intelligence gave to a project to compile a documentary film on German atrocities.

The project originated in February 1945 in the Psychological Warfare Division of SHAEF (Supreme Headquarters Allied Expeditionary Force). Hitchcock was recorded expressing his primary concern that “we should try to prevent people thinking that any of this was faked.”]

The testimony of the German soldier can be verified by multiple other witnesses, including British Ministry Of Information, which admitted that the British Broadcasting Company (BBC) would be involved in an ongoing anti-German propaganda campaign to distract the public from the horrifying atrocities committed by the Soviet army.

And Victor Cavendish-Bentick, the Head of British Psychological Warfare Executive (Propaganda), in a handwritten note, written on Aug 27th, 1943, confirmed that the alleged mass murder of Jews in the so-called ‘death camps’ was indeed a psy-op:

“We have had a good run for our money with this gas chamber story we have been putting about, but don’t we run the risk eventually we are going to be found out and when we are found out the collapse of that lie is going to bring the whole of our psychological warfare down with it? So isn’t it rather time now to let it drift off by itself and concentrate on other lines that we are running.” [Public Record Office Document F0371/34551 revealed by Stephen Mitford Goodson, Inside the South African Reserve Bank]

Of course, it would be very easy to confirm the ethnicity of the bodies in the mass graves at Dachau and Buchenwald simply by exhuming some of the bodies and running DNA tests on them.  Any simple DNA test could confirm that the remains were Jewish or German.  But as we know from all over Europe, Jewish groups have absolutely forbidden any of these “Jewish mass graves” to be disturbed because to do so would allegedly violate their “religious” beliefs, except where it’s convenient to them.

And now governments in America and Europe are spending tens of millions of dollars every year to make sure each and every impressionable school-age child is shown these faked images for one simple purpose: to transform the victimizers of World War II into the victims, to essentially illicit sympathy for the devil.