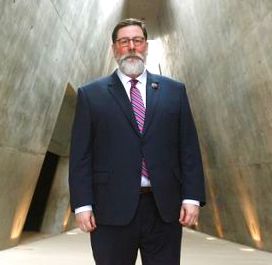 At Yad Vashem in Jerusalem on his visit to Israel, Pittsburgh Mayor Bill Peduto said America’s gun problem and rising anti-Semitism must be dealt with simultaneously and head on:

Four months after his city experienced the deadliest anti-Semitic attack in U.S. history, in which a gunman killed 11 congregants and wounded six during Saturday prayers at the Tree of Life Synagogue, Pittsburgh Mayor Bill Peduto says city residents and the local Jewish community will not be broken, but warns a similar incident could happen again in the future.

Peduto spoke to Israel Hayom during a visit to the Yad Vashem Holocaust memorial and museum. He was in Israel this week as part of a tour organized by the American Jewish Congress for mayors of cities from around the world.

“Pittsburgh’s a very resilient city. It went through an economic collapse in the 1980s and the 1990s that was one of the greatest economic crashes in American history. It’s been flooded in the 20th century. It burned to the ground in the 18th century. But it’s always found a way to pick itself up and brush itself off.

Peduto said the issue of firearms in America and the war on ant-Semitism must be tackled simultaneously.

“We see acts of anti-Semitism increasing around this world,” he said. “We have to recognize that it takes steps in order to get to the point, like Oct. 27 [the day of the Pittsburgh attack]. And if we don’t address it proactively at the beginning, then we have the danger that it could repeat.”

When asked whether America was still the safest place for Jews, Peduto replied, “Work to make it.”

There you have it: the greatest fear of the Jews is that the gentiles will ultimately use their rights to bear arms against the Jews in some future antisemitic pogrom.  This is what the entire debate over gun control is all about and why Jews have been the most vocal proponents of gun control, and ultimately the repeal of the Second Amendment which guarantees those rights.

What Jews don’t seem to grasp is that the harder they push to restrict gun rights, the more “antisemitic” the goyim will get.  The more the Jews try to curtail free speech in order to “fight antisemitism”, the more antisemitism they will create.  The best way to lessen antisemtism is to reduce the cause of it, and trying to restrict the constitutional rights of the goyim is not helping their own self-interests.