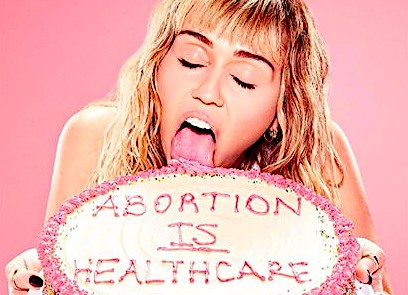 Ariana Grande, Billie Eilish, Lady Gaga and Lizzo are among 136 artists who have joined Planned Parenthood to protest a recent wave of laws in states across the U.S. restricting access to abortion:

The music engagement side to the reproductive healthcare nonprofit’s larger Bans Off My Body campaign launched over the weekend with a full-page ad in Billboard magazine, signed by dozens of artists. Over the next few months, Planned Parenthood will call fans to action at music festivals like Jay-Z’s Made in America in Philadelphia and Music Midtown in Atlanta, with Georgia having just signed into law a so-called “heartbeat bill” banning abortion six weeks into pregnancy. The nonprofit will also have a presence on a number of artists’ national tours this year.

The goal is to motivate half a million people to sign an online petition opposing the bans by Jan. 22, 2020 — the 47th anniversary of Roe v. Wade, which made access to safe, legal abortion a constitutional right.

“Artists can highlight how out-of-touch some of our politicians are in this space,” Planned Parenthood acting president/CEO Alexis McGill Johnson tells Billboard. “They can hold up a mirror and say, [to quote] Marvin Gaye, ‘What’s going on?'”

Planned Parenthood has worked with musicians for years, but Johnson says that 2019 marked a turning point, where seemingly more artists want to be engaged with their efforts than ever.

“It’s incredibly powerful to see artists who not only recognize their role as influencers, and are personally searching for access to information to connect to their constituencies, but also to think about how to take it to the next step,” she says. “What I love about this list of [artists] is how next-generation it is. It feels like we’ve turned a corner in stigma, when mainstream artists can use their platform to really call attention to what’s happening in our country.”

The ever-outspoken Eilish, who is 17, is one of the younger artists on the list. “I’m proud to be standing up for Planned Parenthood as they fight for fair and equal access to reproductive rights,” she said in a statement to Billboard. “We cannot live freely and move fully in the world when our basic right to access the reproductive health care we need is under attack. Every person deserves the right to control their body, their life and their future.”

These “artists” aren’t musicians at all, as none of them can sing or play instruments particularly well.  They are mouth pieces for the oligarchs to help sell their destructive, anti-Christian, nation-wrecking agenda to America’s impressionable young people.  The music and the satanic-laden promotional videos are merely the vehicles for their message.  Abortion is freedom and is as “American” as “apple pie”.

These young people are being fooled into thinking they are “rebelling” against the “establishment” when, in fact, all they are doing is exactly what the richest and most powerful people in the world want them to do.  Promoting abortion “rights” is the ultimate act of conformity and obedience, as is liberalism in general.  If they really want to know what it’s like to truly rebel, teens should pick up their Bibles and turn off MTV and Facebook, and then watch the mainstream media start attacking them as “dangerous”.