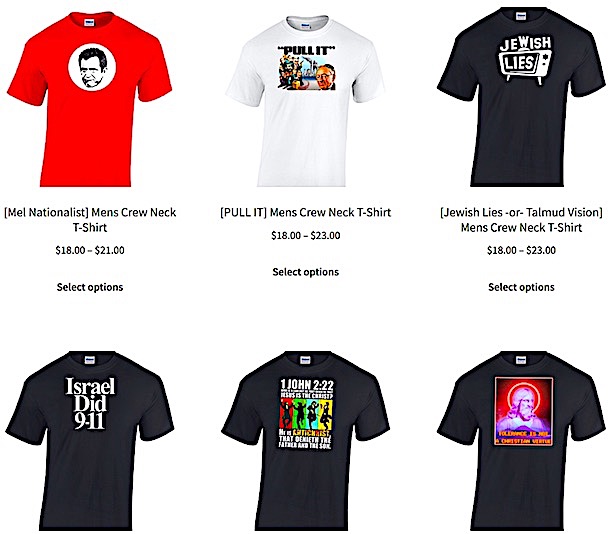 Jews in Northern California are on high alert after discovering that Jon Minadeo Jr., a 38-year-old Petaluma man infamous within the Bay Area Jewish community, has launched an online merchandise store selling hundreds of T-shirts that dare to expose and mock Jewish subterfuge and supremacy:

Dubbed “Goyim Gear,” some of the T-shirts bear the “Happy Merchant” anti-Jewish cartoon, one calls the Holocaust a “hoax” using the Hulu video streaming website font, while another mimics “Godfather” movie art using the words, “The Jew Namer.” Others show portraits of Hitler, one celebrates the Waffen SS and one uses an anti-gay slur.

“All proceeds go to the next N.T.N.T.,” a message at the top of the webpage says, referring to what Minadeo calls the “Name the Nose Tour,” outings on which he and others drive around California shouting antisemitic slurs and conspiracy theories through a megaphone.

Minadeo, with a group known as the Goyim Defense League, went on a Name the Nose tour last summer in Southern California, driving in a white van on which antisemitic messages were scrawled such as “Jews killed Jesus” and “BLM is funded by Jews.”

They hung banners reading “Honk if you know the Jews want a race war” on a Los Angeles highway overpass, shouted conspiracy theories about Covid-19 to people wearing masks and stood outside of a Chabad center claiming that “these Jewish terrorists” were behind 9/11.

Minadeo shouted, shirtless in front of the Chabad Jewish Community Center in Marina Del Rey, “these are the people who are taking away our freedom of speech in America.” The Goyim Defense League took video of him doing so and published it on a video sharing website, which is still active.

The T-shirts are advertised as “some fresh GoyGear” and are described as “100% preshrunk” with a “classic fit.”

Minadeo is known in the Bay Area as a bombastic anti-Jewish propagandist who films his antics and posts them online. Last October, Minadeo and others scaled a fence to hang a banner above a highway in Oakland that read “Why are Jews censoring free speech?” During the summer of 2019 he posted flyers in Novato and Santa Rosa blaming Jews for 9/11, a theme running through his conspiracy theories.

Minadeo monetizes his video sharing website in part via “donations” to his Bitcoin wallet, a Zelle account and a CashApp account, according to the Middle East Media Research Institute, a terrorism watchdog organization.

The domain registrar for the new merchandise store is Namecheap, a registrar and technology company founded in 2000, according to its website.

In response to a query from J., Namecheap said it was not responsible for the content on Minadeo’s site and would not be taking any action against it.

“As a service provider, we are not involved in such investigations,” the statement emailed from “Dmytro Ch.” read. “We do not serve as the arbiter of fact in this matter.”

Namecheap said to contact the “hosting provider;” however, the host name was hidden.

In an email to J. WooCommerce said its software is open-source and available to anyone, so “our options for addressing these situations are limited.

What is probably the most unnerving and inconvenient for the Jews is that Jon Minadeo, who runs this t-shirt business, appears to be a Christian — he openly wears a necklace with a Christian cross — and a number of his t-shirt designs have pro-Christian themes which even quote the Bible.

Goyimtv.com where he hosts his livestream provides introductory historical information on Jewish shenanigans — everything from the Israeli involvement in 9-11 to the murder of Mary Phagan by Leo Frank.

Interestingly, a video posted on Goyimtv, covers the recent arrest of Paul Miller — the GypsyCrusader — and suggests that if Miller somehow gets away with the weapons charges without going to prison, that he may have been an FBI informant — which might explain some of the unusual circumstances surrounding his case, which we have covered here.

The Jewish supremacists at the Anti-Defamation League have admitted that Minadeo has been “on their radar” for many years — but they’ve begrudgingly admitted that his anti-Jewish activism is protected by his right to freedom of speech under the U.S. Constitution — a troublesome document that Jews claim incites “terrorism”.

And it is because of people like Minadeo who have the courage to openly — and lawfully — protest against Jewish supremacy that the ADL wants new draconian and unconstitutional laws enacted to strip Americans — especially White Americans — of their freedoms.

They will attempt to justify these “hate speech” laws based on the demonstrably false claim that “antisemitism” directly  “incites” people to violently attack Jews — a notion that the Federal government itself rejected in an official — but suppressed — report by the U.S. Department of Commerce.

From a Jewish perspective, the truth feels like a violent physical attack on them — because if the tables were turned, and the Jews had the power to do so, they would violently suppress anyone who tells the truth about them — as they proved in Bolshevik Russia.

When we refuse to be ruled by Christ, we open ourselves up to be ruled over by Jews, as Solzhenitsyn warned:

“I call upon America to be more careful with its trust.  Prevent those from falsely using social justice to lead you down a false road.  They are trying to weaken you.  We can only reach with determination for the warm hand of God, which we have so rashly and self-confidently pushed away.”