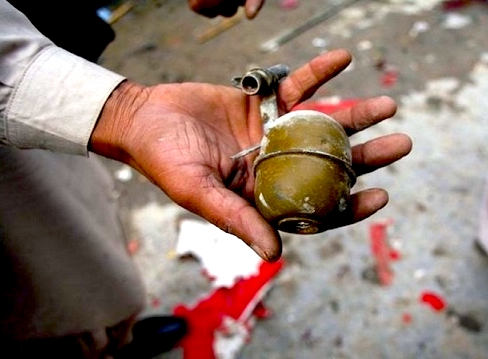 As authorities in the Netherlands consider doubling the punishment for possessing hand grenades, a favorite weapon among new Muslim migrants, Poland is hitting pedophiles with much harsher prison sentences:

The Tweede Kamer, the lower house of Dutch parliament, wants to double the prison sentence for using or possessing a hand grenade from four to eight years. Minister Ferdinand Grapperhaus of Justice and Security approves of this proposal, AD reports.

Hand grenades are increasingly being used to settle debts in the criminal underworld, and to intimidate business owners. The number of incidents involving hand grenades doubled last year. And the counter for 2019 already stands halfway to the 2018 total, according to the newspaper. These extremely cheap explosives are also increasingly used in ATM bombings…

[Meanwhile], Poland has announced plans to double jail terms for paedophiles after a documentary on priest sex abuse sparked outrage in the country.  Convicted paedophiles could now face a maximum sentence of 30 years or, in the most serious cases, life in prison.

The documentary includes harrowing testimonies from victims and has been viewed more than 18 million times.

Correspondents say the conservative government, allied to the Catholic Church, is scrambling to react.

However the ruling Law and Justice party says the legal amendments have been in the works for months. The proposal will now go to the senate.

Here we see two European countries going in completely opposite directions.  The Netherlands has taken in violent migrants from all over the Third World who have literally turned some cities into war zones, with hand grenades as their preferred weapon of choice because the liberals there have basically outlawed private gun ownership for self-protection and handcuffed the police with political correctness.  As Christian churches are shutting their doors, Muslim mosques are on the rise, as are terror attacks.  Restricting guns didn’t work, nor will making hand grenades even “more illegal”.  Possession of books glorifying pedophilia remain legal in this marxist utopia.

Whereas Christian Poland has virtually put a moratorium on Muslim migrants, and by doing so, it has become one of the safest and not coincidentally Whitest countries in all of Europe in which to live.  Without having to drain their financial resources on housing and feeding worthless and unnecessary Third World migrants, who are raping and killing their women and children, they are able to focus on more important issues to promote strong Christian families and overall quality of life by going after degenerate pedophiles and awarding those Poles who combat the LGBT agenda.  Which way western man?