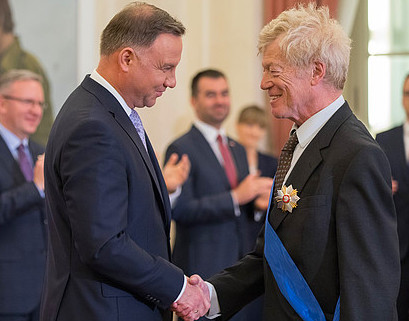 Poland’s President Duda bestowed a prestigious state honor Tuesday on an English philosopher for his contributions to Poland’s anti-communist struggle in the 1980s:

President Andrzej Duda presented Sir Roger Scruton with the Grand Cross of the Order of Merit of the Republic of Poland, the highest award that can be given to a non-Pole.

In bestowing the award, Duda spoke of the influence Scruton’s book “The Meaning of Conservatism” had on his own political vision. He said Scruton’s support for the anti-communist struggle “contributed to the growth of social courage.”

The ceremony came as Poland was celebrating the 30th anniversary of the first partly free elections in 1989, a key moment in the unraveling of communism throughout the Eastern Bloc.

It also came two months after the British government fired Scruton as head of a public housing body after he was quoted in a British magazine making statements about Muslim asylum seekers, billionaire George Soros and China.

Scruton has said that his words were twisted and has denied the bigotry ascribed to him by critics.

In the interview in the New Statesman magazine, published on April 10, Scruton was quoted as saying that the term Islamophobia was “invented by the Muslim Brotherhood in order to stop discussion of a major issue.”

He warned that “Hungarians were extremely alarmed by the sudden invasion of huge tribes of Muslims from the Middle East.”

He defended Hungary’s controversial leader Viktor Orban’s campaign against George Soros by insisting that “anybody who doesn’t think that there’s a Soros empire in Hungary has not observed the facts.”

And he warned of China: “They’re creating robots out of their own people… each Chinese person is a kind of replica of the next one and that is a very frightening thing.”

After his comments were slammed as racist, anti-Semitic and Islamophobic, he accused his detractors of taking his words out of context or deliberately misunderstanding them…

A spokesman for the Board of Deputies of British Jews backed Scruton’s sacking from the government housing committee, saying after the April comments, “As soon as we saw Sir Roger Scruton’s unacceptable comments we contacted Government to make our concerns heard.  We are satisfied that the right decision has been made to dismiss him.”

Well, that’s exactly how the Jews destroy people whose opinions they don’t like: by “deliberately misunderstanding them.”  They  know full well what Scruton’s intent was in making these comments, which was simply defending the White Christian culture of Europe that goes back well over 1,000 years, and in the case of England, close to 2,000 years.

But radical jewish activists who now control the press and public opinion want to deny anyone like Scruton a voice lest people wake up and realize that their culture and history is literally being either rewritten or completely erased.

And here we have Poland again awarding someone who opposes this nation-wrecking agenda and someone the liberal Jews hate, and by doing so are sending a clear message that they are not buying into this demoralizing and subversive agenda of multi-racialism and diversity.

When England ceases to be English, it will cease to be a nation in the most basic sense, and in its place will come something that more closely resembles Brazil, with the same chronic economic and social problems unique to a marxist multicultural utopia: stagnation, demoralization, and degeneracy.

If the video above gets removed from Youtube, it can be viewed on Bitchute here.