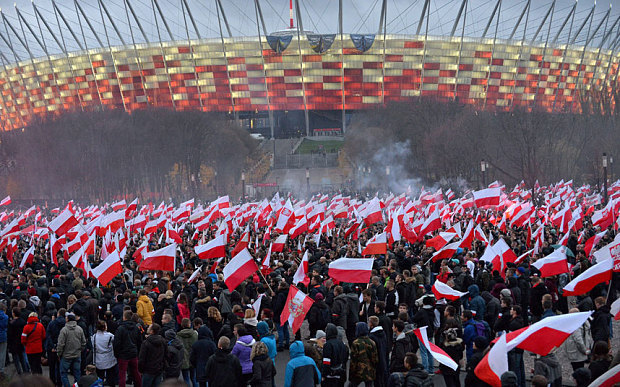 Poland has announced that it will veto the European Charter of Fundamental Rights by disingenuously claiming that it does not sufficiently protect the rights of Jews and Christians:

Poland’s government says it is vetoing the adoption of an annual report on the European Union’s guiding civil rights document because it did not call for protecting Christians and Jews from religious discrimination.

Justice Minister Zbigniew Ziobro’s decision on Thursday to oppose the latest update on the application of the EU’s Charter of Fundamental Rights meant the report lacked the unanimity required for approval.

The veto adds to a series of disputes between Poland’s current conservative government and EU leaders over basic values.

Poland’s Justice Ministry says it objected because the proposed report specifically cited the need to protect LGBT people, immigrant children and women, but not Jews and Christians.

The European Commission has published a report on how the charter is used to promote rights and freedoms since 2010.

Poland is on record that it fully intends to remain a White Christian nation, and will resist the EU’s attempts to “diversify” it with Third World immigration.  They have also been lukewarm in its protection of LGBT “rights”.  So it comes as no surprise that they have rejected this new EU Charter which promotes policies that ultimately will undermine the Polish people and nation.

To avoid being labeled “antisemitic,” the Polish government is pretending to be concerned that this EU Charter doesn’t explicitly protect the rights of Jews, but nothing could be further from the truth.  The Poles first priority is to protect Christian Poles, but they can’t say that because it would be “racist”, so they include Jews in their objection to avoid those smears.

What are the Jews going to say?  “No, we don’t want Poland to defend our rights as Jews?”  Clearly, the Poles, like the Hungarians, have figured out how to circumvent the jewish agenda by feigning concern over Jews themselves.  By protecting jewish rights, the Poles protect their own rights.  This is exactly what the Jews have done in the past when they pretended to protect the civil rights of Blacks, they ultimately were protecting their own rights as Jews.