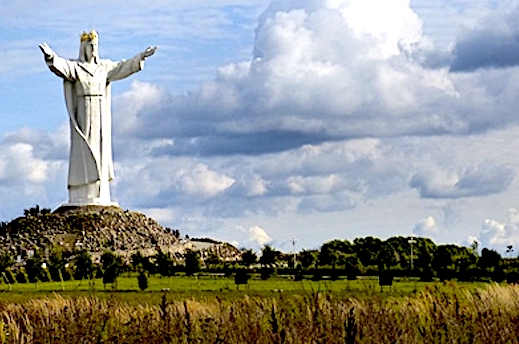 Documents have come to light revealing that the family of Chechen Abudllah Anzorov, the Muslim who beheaded history teacher Samuel Paty in Paris, applied for asylum in Poland but were rejected by the authorities — instead, they later received a permit to stay in France for ten years as refugees, according to Salon24.pl:

Following the gruesome murder, French police have currently detained the killer’s family and closest friends while investigations are still ongoing.

Patrick Edery, the French publicist working for Poland’s Solidarity weekly magazine, noted on social media of Poland’s refusal to grant the Anzorov family asylum. He pointed out that owing to Poland’s policies on accepting refugees, which he notes have been “condemned” by other countries, Poles have not experienced a terrorist attack on their soil because the state protects its citizens.

“Poland refused asylum to the Chechen (and his family) who beheaded Samuel Paty Thanks to its much-maligned policy, Poland has not experienced attacks on its soil, and its rates of insecurity and rape are the lowest in Europe. The [Polish] state protects its citizens above all,” Edery wrote on Twitter.

Officials from Poland’s ruling conservative government have said in the past that they refuse to admit illegal Muslim migrants due to the security threat they pose. Law and Justice Party (PiS) MEP Dominik Tarczynski told Al Jazeera in 2019 that Poland refused to accept a single migrant from the EU’s migrant quota scheme to keep Poland safe, a policy the country has been criticized for, but refuses to back down from.

In response to the brutal murder, thousands took to the streets of Paris to commemorate Samuel Paty.

“We are France,” declared Prime Minister Jean Castex who took part in the Sunday Paris protests against hatred and in defense of freedom of speech. Castex’s quote became a slogan of the protesters.

Teacher trade unions alongside the satirical magazine Charlie Hebdo have called for further demonstrations in Paris and other major French cities. Charlie Hebdo was also the target of a terrorist attack last month after it decided to republish the original prophet Muhammad cartoons that sparked the 2015 terrorist attack. In the most recent attack, two people were severely injured in an attack by an Islamist with a meat cleaver…

French President Emmanuel Macron is under tremendous pressure to take action over the numerous Islamic terrorist attacks taking place on French soil. Yesterday, the government announced plans to close the Collective Against Islamophobia in France (CCIF) following Pety’s beheading. French Interior Minister Gérald Darmanin said on the Europe 1 channel yesterday there were elements in the CCIF that have become “enemies of the Republic.”

However, many believe after years of promises, the government’s actions amount to too little, too late.

In fact, a similar beheading in the name of Islam already occurred in France in 2015 when Hervé Cornara was beheaded by Yassin Salhi, who hung Cornara’s head on a fence post alongside flags of Chahada, an Islamic creed.

Hervé Cornara’s brother, Didier Cornara, told Le Parisien yesterday that the tragic murder destroyed his family and that the government has forgotten about him and the murder. He blamed Macron’s government for failing to take action against radical Islam to prevent another tragedy.

Didier Cornara told journalists he wonders when “will our policies take their hands out of their pockets and put out these imams, these preachers and all these people who preach and stir up hatred? When I say that, it’s not racism. We’re just at war. And we have to fight the enemy. When you behead a professor on a sidewalk, if it’s not a war, what is it?”

France has the largest Muslim population in Europe, and as it only grows larger over the coming years, there are concerns that integration has not only been a failure, but that the continuous terrorist attacks and surging crime now pose an existential threat to the French Republic.

If real French people were in charge of France — rather than international Jewry and the House of Rothschild — this beheading would have been a casus belli — and every single Arab would have been rounded up and forcefully removed from the nation, no exceptions.

There would be no quibbling about the difference between “real” Islam and “extremist” Islam — or even between “good” and “bad” Arabs.

They have “bad” Arabs in France because they’ve swallowed the suicidal egalitarian kool-aid that “not all” Muslims are terrorists.

But these “protests” over the beheading show just how emasculated and impotent the French people have become — you don’t “protest” beheadings, you go to war over them.

Arabs will see these large protests over the beheading as a victory — after all, France is not laying a finger on any of them in any significant way — the Jews in France would never allow it — and why should they as long as the French military is providing them with personal armed guards?

Instead they are fed the meaningless slogan, “We are France,” meaning Arab Muslims are still “France”, too — and as long as that’s the case, France has no future, which has been the plan all along.

As Paris burns and heads roll in the streets, the Jews are booking flights to Tel Aviv.