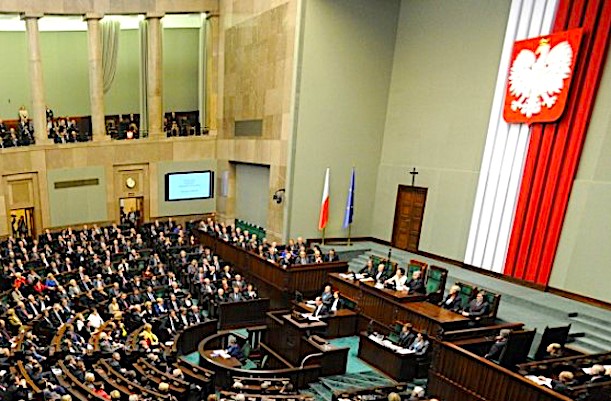 The Polish Ministry of Digitalisation has denied that Prime Minister Mateusz Morawiecki signed the Global Appeal to Stop 5G on Earth and in Space, adding that, “The opponents of 5G are heating-up the mood, serving customers fake news – we want to give Poles a reliable source of information about 5G so that no one misleads them”:

Hopes raised that Prime Minister Morawiecki might have some genuine humanitarian concerns for his people appear to have been proved unduly optimistic.

This week, according to the present parliamentary schedule, Mateusz Morawiecki will lead his government into presenting a new Act that will annul the existing law on ‘acceptable levels’ of Electromagnetic Frequencies (EMF) in order to introduce microwave frequency transmission levels 10 to 100 times more intense than current levels. This is being done to satisfy the telecommunications industry’s ambition to install tens of thousands of 5G transmitters across the length and breadth of the country.

If this Act is passed, the Prime Minister and government parliamentarians will be complicit in introducing a completely untested technology which over 2,000 scientists and 1,400 medical doctors from all over the world have described as presenting a direct threat to the health of humans, animals, insect and plant life.

The government of Poland appears determined to ignore such medical and scientific warnings. Also to ignore the safety-net known as ‘the precautionary principle’ in which anything judged as causing potential harm cannot be put in the public domain without first undergoing independent assessment for its safety.

This refusal to follow responsible principles demonstrates that the Prime Minister is ready to sell the freedom of Poland, the health of the electorate and the welfare of future generations, to corporate interests. The fact is that all decisions on 5G are made without any public consultation or any opportunity to object.

Awareness of the threat that 5G poses is rapidly growing. Protests in different parts of Poland are demonstrating the anger people feel at being forced to accept this highly controversial technology. Some protesters held-off for a while in the hope that Prime Minister Morawiecki had shown a human face. But since it is now officially denied that he supports stopping 5G, resistance will undoubtedly grow, with the effect that in the autumn election the Polish government (Pis) is likely to be shown a red card for its refusal to listen to the people.

Israel is a major promoter of this new, controversial and untested technology, so you can be “assured” that they have the public’s “best interest” in mind.  With the Jewish State (aka “Israel”) one might expect that Poland might be a little skeptical of the hype, but apparently this isn’t the case here, as Poland probably sees 5G as essential to its expanding economic prosperity, and they are willing to accept the health risks and ignore the warnings.

In reality, opting out of the 5G network will become increasingly difficult because new cellular devices will be manufactured to optimally operate on 5G, and anyone with non-compliant devices will find themselves quickly becoming “obsolete” and unable to effectively thrive on this new centralized hive they have planned for us.  Like they have done with vaccines, they will tell us that while in “rare” cases, some people may have “sensitivity” to this intense radiation in the formation of “unusual” cancers, well, that’s a small price to pay for the “greater good” of “global inter-connectivity”, which is to say, control.