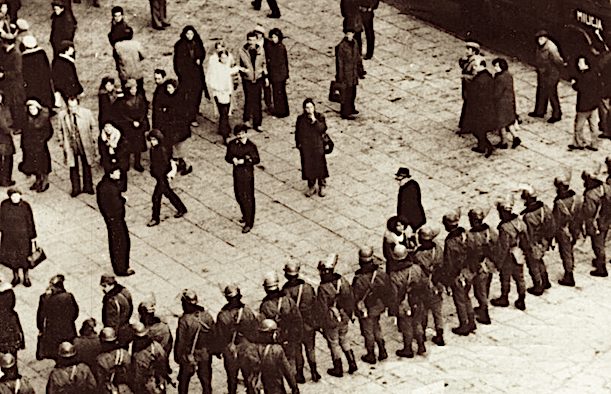 Poland’s government wants to introduce special benefits for those who were active in opposition to Poland’s communist system before 1989 and who faced political persecution by the regime:

Under legislation that was submitted by the prime minister to parliament this week, such individuals will receive a guaranteed minimum state pension of 2,400 zloty (€545) per month as well as other benefits, including reduced fares for public transport.

“It is our duty to provide people who fought for our freedom and independence with a dignified standard of living,” says Prime Minister Mateusz Morawiecki, quoted by Niezależna.pl.

Morawiecki himself was active in underground anti-communist activity in the 1980s, including as part of the Fighting Solidarity movement founded by his late father, Kornel. The younger Morawkiecki has previously described how he was repeatedly detained and beaten by the communist security services.

Morawiecki stressed that without the sacrifices of such activists, the Poland of today would not exist. The new law will finally be a way to show appreciation.

“The courage and persistence in the fight for the freedom of Poland had its price,” tweeted the prime minister. “Many paid for this [by facing] persecution and losing their health. Today our homeland has a chance to make up for those wrongdoings, at least partially.”

The new benefits will apply to the 12,000 or so people who are officially recognised as having been opposition activists or having been repressed for political reasons in the period 1956-1989. (Those who fought on behalf of Poland in 1939-56 hold a separate war veteran status.)

…Assuming the legislation passes parliament – where the ruling Law and Justice (PiS) party have a majority in the decisive lower house – and is signed by President Andrzej Duda, a PiS ally, it is expected to go into force in the autumn. Its estimated annual cost is 61-62 million zloty (around €14 million).

“I feel that there can never be too much help for these people,” Waldemar Buda, a deputy minister for development funds and regional policy, told Money.pl. “Not everyone is aware how much we owe them.”

Buda noted that many opponents of the communist regime lost jobs or were demoted as a consequence of their actions. “These are now elderly people, whose pensions are often lower than they should be,” he added.

“Just as we have taken away the high pensions of all members of the SB [the communist-era security services], we are making up for the lost years of the opposition members now” said Buda.

After coming to power in late 2015, PiS fulfilled an election promise by decreeing that the pensions of former members of the communist security services could be no higher than the average state pension of 2,100 zloty a month. When the law was passed three years ago, almost 40,000 pensioners saw their payments lowered.

The move was part of a broader “de-communisation” policy by PiS, which argues that after 1989 there was not a tough enough reckoning with Poland’s communist past and that many “post-communists” managed to remain in influential positions.

While western Europe and America are embracing the ongoing Bolshevik Revolution 2.0, Poland is actively purging itself of its communist ‘dirt’, as President Duda recently stated.

And as Germany continues to undergo ‘denazification’ 75 years after WWII, Poland is being accused of embracing ‘Nazi’ policies and values, as its faces a national cleansing in the wake of its release from bondage under Jewish communism.

The EU has recently attempted to economically punish Poland for combating LGBT bolshevism, but Poland has deftly countered that attempt by economically compensating those who opposed this nation-wrecking agenda.

Of course, this ‘de-communization’ is really de-Judaizing the nation — and everybody knows it — as Joe McCarthy found out in America, you can’t go after the communists without going after the Jews and their power base.

When Duda refers to communist ‘dirt’, the Jews hear ‘dirty Jews’ — but if the shoe fits…

If Poland is to survive this ‘purge’ and reduce the Jewish dominance of the nation, it must continue to uncompromisingly assert its identity as a Christian nation otherwise it will end up subverted and destroyed like all of western Europe.

Here is a list of infamous quotes made by Jews about their beloved communism — in their own words:

“Judaism is Marxism, communism.”
Harry Waton, A Program for the Jews and an Answer to All Anti-Semites (New York: Committee for the Preservation of the Jews, 1939), p. 64

“The communist soul is the soul of Judaism.”
Harry Waton, A Program for the Jews and an Answer to All Anti-Semites (New York: Committee for the Preservation of the Jews, 1939), p. 143

“The picture which the Soviet Union presents today is one that should bring rejoicing to world Jewry.”
The Youngstown Jewish Times, Sept. 18, 1936, page 51

“It would be absurd to deny the intensity of the Jewish participation in the Russian revolutionary movement.”
Leon Dennen, in The Menorah Journal (New York) July-September 1932, p. 106

“That achievement – the Russian-Jewish revolution – destined to figure in history as the overshadowing result of World War, was largely the outcome of Jewish thinking, of Jewish discontent, of Jewish effort to reconstruct.”
The American Hebrew, September 10, 1920

“The Bolshevik Government of Russia is the key-stone of the arch of the proof of the Jewish conspiracy for radicalism and world-domination.”
William Hard, The Great Jewish Conspiracy (New York: American Jewish Book Company, 1920), p. 31

“Jewry has come to wield a considerable power in the Communist Party.”
Dr. Avrahm Yarmolinsky, in The Menorah Journal (New York), July 1928, p. 37

“Karl Marx, who came from an old family of rabbis and brilliant Talmudic scholars, was to point the path of victory for the proletariat.”
L. Rennap, Anti-Semitism and the Jewish Question (London, 1942), p. 31

“Among his [Karl Marx’s] ancestors were Rabbis and Talmudists, men of learning and keen intellect.”
Henry Wickham Steed, in The American Hebrew (New York), December 9, 1927, p. 206

“The Bolshevik Revolution has emancipated the Jews as individuals.”
Dr. Avrahm Yarmolinsky, in The Menorah Journal (New York), July 1928, p. 33

“There is no Jew who does not hope with all his heart that the Soviet Union will survive and be victorious.”
Zionist Review (London: Zionist Federation of Great Britain and Ireland), September 26, 1941, p. 7

“Communism and internationalism are in truth and in fact great virtues. Judaism may be justly proud of these virtues.”
Harry Watan, A Program for the Jews and an Answer to All Anti-Semites (New York: Committee for the Preservation of the Jews, 1939), p. 80

“If the tide of history does not turn toward Communist internationalism … then the Jewish race is doomed.”
George Marlen, Stalin, Trotsky, or Lenin (New York, 1937), p. 414

“The [Jewish] Commissaries were formerly political exiles. They had been dreaming of revolution for years in their exile in Paris, in London, in New York, in Berlin, everywhere and anywhere. They saw in the Bolshevist Movement an opportunity of realizing the extreme ideas of Communism and internationalism to which their fate had compelled them.”
Dr. D. S. Pazmanik, in The Jewish Chronicle (London), September 5, 1919, p. 14

“The Jewish people will never forget that the Soviet Union was the first country – and as yet the only country in the world – in which anti-Semitism is a crime.”
Jewish Voice (New York: National Council of Jewish Communists), January 1942, p. 16

“Anti-Semitism was classed [by the Soviet Government] as counter-revolution and the severe punishments meted out for acts of anti-Semitism were the means by which the existing order protected its own safety.”
The Congress Bulletin, (New York: American Jewish Congress), January 5, 1940, p. 2

“The part which Jews play in the [Communist] Government of the country [Russia] does not appear to be declining.”
Harry Sacher, in The Jewish Review (London), June-August 1932, p. 43

“We Jews, we the destroyers, will remain the destroyers forever. Nothing that you will do, will meet our needs and demands. We will destroy because we need a world of our own.”
Maurice Samuel, You Gentiles, page 155

“The Russian intelligentsia . . . saw in the philosophy of Judaism the germs of Bolshevism – the struggle of … Judaism versus Christianity.”
Leon Dennen, in The Menorah Journal (New York, July-September 1932, p. 105