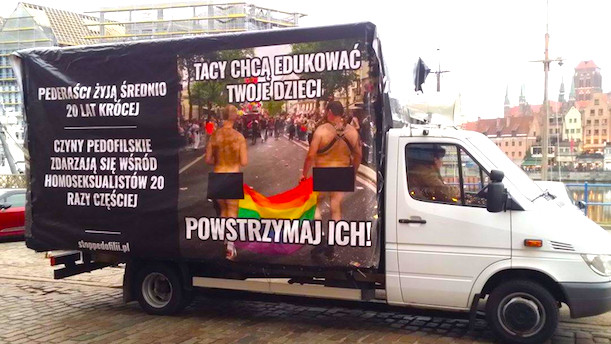 A court in Wrocław, Poland has dismissed a lawsuit against the organizers of an anti-LGBT campaign that portrays homosexuals as potential pedophiles, concluding that the activity had an ‘informative’ and ‘educational’ purpose and helped raise awareness of pedophilia:

The campaign, run by ultraconservative NGO Fundacja Pro, has become a familiar sight around Poland in recent years. In particular, the group is known for driving vans through city centres broadcasting anti-LGBT messages over loudspeakers and displaying them on large banners.

Their slogans warn that the “LGBT lobby wants to teach children” and include calls to “stop paedophilia”, with a logo showing a crossed-out rainbow flag. The group also publicizes various claims regarding the alleged prevalence of child abuse among gay people based on controversial and contested research by American scholars Mark Regnerus and Paul Cameron.

Efforts by LGBT individuals and organizations to respond to the campaign have been hindered by the fact that Poland’s hate-crime laws do not cover sexual orientation or gender identity.

Last year, however, lawyer Bartłomiej Ciążyński – who is deputy chairman of Wrocław city council and the mayor’s plenipotentiary for tolerance – filed a civil suit against Fundacja Pro, arguing that its campaign “insulted, slandered and violated the dignity” of an LGBT client, reported website Onet.

But this week the district court in Wrocław dismissed the case. In his justification, Judge Adam Maciński said that Fundacja Pro’s campaign “should be considered as having an informative and social dimension”, reported Gazeta Wyborcza.

“It illustrates the issue of paedophilia to the public, as well as differences in the way sex education is implemented among minors…while [also] addressing the problem of extreme sexual education,” said the judge. “The campaign did not take the form of aggressive criticism, let alone stigmatising or harassing the plaintiff.”

As a result, Maciński ruled that the campaign “is an expression of the defendant’s constitutionally guaranteed freedom of speech and of belief”. Ciążyński has promised to appeal against the decision.

The research connecting homosexuality to pedophilia is ‘contested’ and ‘controversial’ only because it reveals just how depraved and dangerous the LGBT ‘lifestyle’ truly is to our families and society at large, and gays are offended by the idea that there’s anything ‘abormal’ about them.

Normal, healthy people don’t want to make it legal to have sex with 4 year-olds.

Less than 2% of the population is gay, and yet gays comprise about 40% of pedophiles.  Gays counter this by claiming that the majority of pedophiles aren’t gay, which is avoiding the central issue, which is that homosexuals are far more likely to be pedophiles than heterosexuals, so much so that it would be absolutely irresponsible to allow any homosexual near our children for any reason, especially in positions of trust and authority, such as teachers, counselors, health care workers, and especially day care workers.

Obviously, these degenerates don’t have control of Poland the way they do western European countries, Canada, and the U.S.A. where any objection to homosexuals is considered ‘hate speech’.

The Poles are unapologetically anti-LGBT, and show no signs of backing down from these Sexual Bolsheviks.

Towns all across Poland have signs warning visitors that LGBT activists are not welcome, and they give out awards to people who actively campaign against ‘gay rights’ organizations and keep their communities morally grounded and safe for children and families. 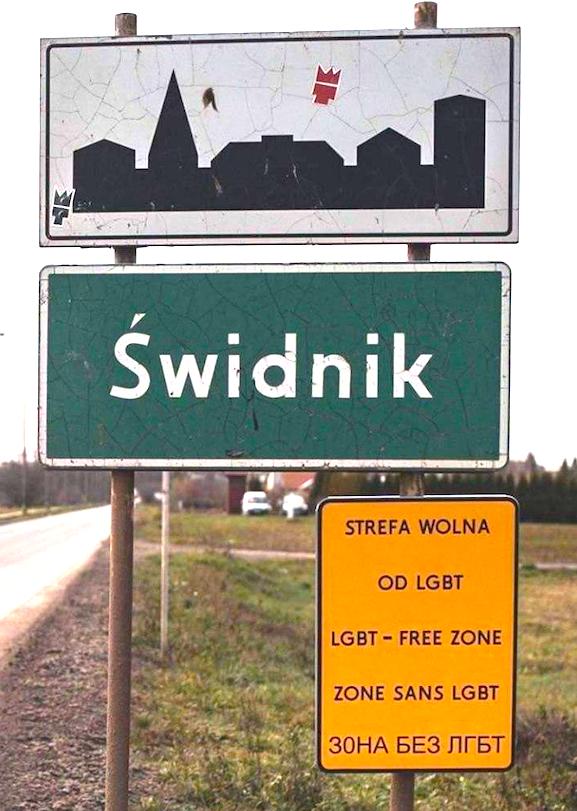