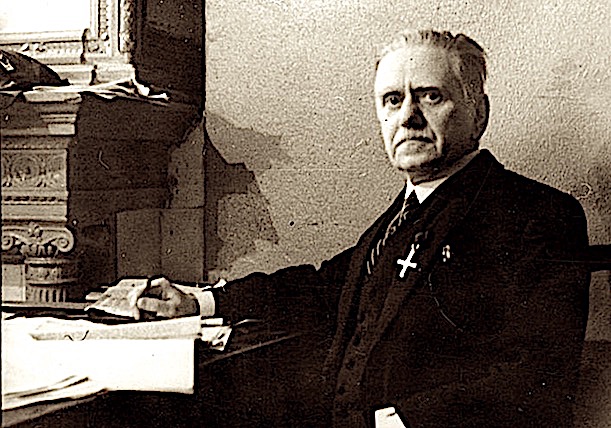 Jewish supremacist groups are predictably criticizing Poland’s embassy in London for promoting the legacy of Polish nationalist, Władysław Studnicki, who died in exile in the U.K. after World War II.

“We are appalled by this case of glorification of an antisemitic, pro-Nazi collaborator by officials of the Polish state,” Rafal Pankowksi — director of the Never Again organization, which campaigns against antisemitism and racism — declared in response to reports in the Polish media that the London embassy was glorifying Władysław Studnicki, a Polish nationalist politician who died in the UK capital in 1953.

During Poland’s period as an independent state between 1919 and 1939, Studnicki espoused antisemitic views similar to those of the Nazis in Germany. Deeming that Jews were “parasites on the healthy branch of the Polish tree,” Studnicki proposed the forced removal of 100,000 Polish Jews every year in a bid to bring about the “de-Judaization” of Poland.

According to a report in Vice, the campaign to restore Studnicki’s reputation is being carried out with the blessing of the Polish Embassy in London, one of whose employees is actively promoting the project online.

Agata Supińska, an embassy official, has championed Studnicki on Twitter as “one of the greatest Polish thinkers of the 20th century, who, despite the accuracy of his predictions, has not been accorded respect, and was forgotten for many years.”

In a separate statement, the Polish Embassy said that it was supportive of her efforts.

“The efforts to restore Władysław Studnicki’s grave in London is a civic initiative. Agata Supińska got involved in this project in a purely personal capacity,” the embassy said. “The Embassy of the Republic of Poland in London supports all grassroots civic initiatives aimed at preserving the memory of Poles and their achievements in Great Britain.”

Not only did Władysław Studnicki predict the coming World War and its aftermath, he astutely provided the simple blueprint for Poland to follow that would have averted the war altogether.

He rightly observed that Poland’s alliance with Britain would be the casus belli — and that Poland must sever its defense agreements with Britain and make peace with Germany by granting them the disputed City of Danzig in exchange for the port of Liepaja in Latvia.

He advocated that Poland should declare a stance of armed neutrality in WWII and aid Germany in mutual defense of its eastern border against the encroachment of the Soviet communists.

What is remarkable about Studnicki’s pro-German stance is that he overcame Germany’s historical anti-Polish rhetoric espoused by likes of Bismarck who had openly advocated the genocide of the Poles in order to ensure Germany’s survival, “Hit the Poles until they despair of their very lives….if we are to survive our only recourse is to exterminate them.” (as quoted in Bizmarck by Werner Richter, Putnam Press, 1964, p. 101)

However, Studnicki ran into conflict with the Germans by advocating against the harsh treatment of Polish resistance fighters by the German occupying forces — which he rightfully claimed needlessly turned the Polish populace against the Germans.

Instead of suppressing the Polish resistance, Studnicki advocated that they join forces against their mutual enemy — the Soviets — but his ideas were ignored by the National Socialists.

As far as his desire to rid Poland of its Jewish population, he was not motivated by a hatred of Jews — but rather by a practical understanding that the huge autonomous presence of Jews in Poland — who comprised as a literal state within the state — posed as a historical obstacle to Polish aspirations of nationalism and independence.

What Studnicki advocated vis a vis the Jews, ironically, would be the same policy advocated by the Zionists Jews in Palestine — who believed that in order for the Jews to have a national, independent, and secure “homeland”, they would have to forcibly remove the Arab population from the land.

While the Zionists who advocated and implemented this “cleansing” policy — which involved heinous acts of terrorism such as the bombing of the King David Hotel — are national heroes in Israel today, these same Jews hypocritically vilify Studnicki for desiring the exact same thing for the Polish people.