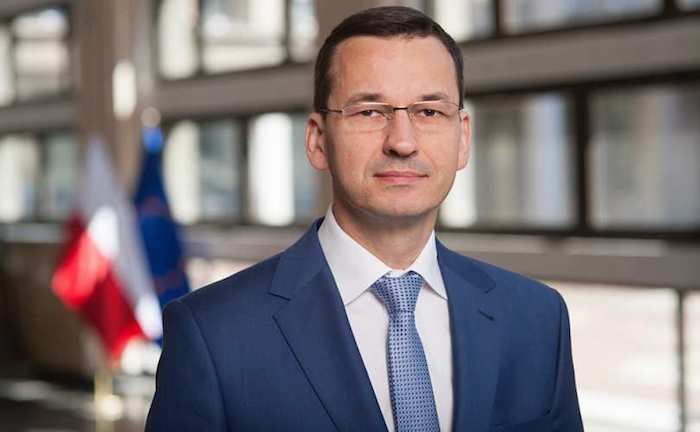 Poland’s Prime Minister Mateusz Morawiecki is being smeared as an “antisemite” for stating what everybody already knows: that greedy Jews control the hedge funds in American and Europe:

Poland’s prime minister was heard making allegedly anti-Semitic remarks in secret recordings from 2013, before he rose to power.

The recordings of Mateusz Morawiecki complaining to friends about “greedy” and rich “Americans, Jews, Germans, Englishmen, and Swiss” that run hedge funds were published Tuesday by the news site Onet.

Part of a corruption scandal, the remarks appeared in a 3-hour recording of Morawiecki, who was then a senior banker, discussing politics and finance with his friends at a prestigious Warsaw restaurant.

That conversation was part of a series of tapes that hammered the popularity of the then Civic-Platform led government and helped drive it from power in 2015, when it was replaced by Morawiecki’s right-wing Law and Justice party.

In another recording, then Interior Minister Bartlomiej Sienkiewicz appeared to ask the country’s central bank chief to give the economy a boost to help the government get re-elected. Under Polish law, the central bank must remain independent of politics.

But now, the content of the Morawiecki tape is coming back to haunt him ahead of a trip to the United States on one of his government’s most sensitive foreign-policy issues – its relationship with Jews and Israel.

In February, Morawiecki, who does not have a history of public statement about Jews, came under attack for speaking about Jewish collaborators with the Nazis in the Holocaust, equating them with the actions of Poles who collaborated with the Nazis.

This statement, which Israeli Prime Minister Benjamin Netanyahu in a rare rebuke called “outrageous,” was in defense of a law passed in January that triggered the worst crisis in Polish-Israeli relations, and has damaged the relations of the European nation with the United States, as well. The law criminalized blaming the Polish nation for Nazi crimes.

The Jews will do everything they can to undermine the popular “right wing” nationalist government in Poland, and this disingenuous attack on Morawiecki is just a beginning salvo across the deck.  The jewish-controlled EU has had Poland in its crosshairs for years, but the Poles have managed to stand up against the attacks.

When Morawiecki took office, he pledged to the Polish people that he wanted to “re-Christianize” Poland, which essentially means “de-Judaize” Poland after 70 years of jewish-communist totalitarianism.  Poland symbolically proclaimed that Christ was their only king in 2016, which sent shock waves all the way to Tel Aviv.  The Jews know full well that they cannot conquer Poland as long as it remains overtly Christian.

Poland looks to the West and sees an atheistic Europe crumbling under the Marxist boot heel of EU bureaucracy.  The Jews are absolute fools to think that the Poles want to be the next Sweden or France.  And trying to shame the Poles with fake smears of “antisemitism” is not going to convince them to change their ways.