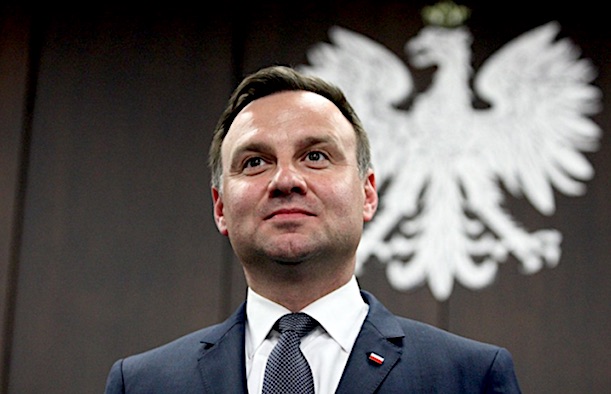 Going against standard political protocol which stipulates that Jews are never responsible for antisemitism, Polish President Andrzej Duda allegedly minced no words and blamed Israel for the rise in antisemitism in Poland, the Jewish Insider reported Friday:

In a Wednesday meeting with American Jewish leaders at the Polish Consulate in New York, Duda criticized Israel’s lack of regret over statements regarding Poland’s participation in the Holocaust, and said Israeli Foreign Minister Yisrael Katz’s comments several months ago were a “humiliation.”

According to participants in the meeting – which included representatives from the Anti-Defamation League and AIPAC – Duda also suggested that the increase in anti-Semitic attacks against Jews in Poland were a consequence of Katz’s comments.

Duda’s countrymen also told him not to travel until Katz apologized, the Jewish Insider added.

In February, Katz said that “Poles suckle anti-Semitism from their mother’s milk.” Following his comments, Poland pulled out of the Visegrad Group (V4) summit in Jerusalem.

If Poles “suckle antisemitism from their mother’s milk,” it’s only because Poles, more than any other European people, from cradle to grave, have had to deal with powerful and rapacious Jews who have plundered the country for centuries, including under the boot heel of jewish communism.

And when the Poles have objected to that plundering, the Jews predictably have cried out with “antisemitism” and literally spit in the face of the Polish Ambassador.  But these false accusations are now falling on deaf ears, which enrages the Jews even more.

How dare the Poles not grovel when the Jews complain?

But White Christian Poland is prospering at a time when atheistic, multi-cultural western European countries are on life support for one clear reason: they have publicly declared that Christ is the one true King of Poland.  They are the only country in Europe which has made that formal declaration, and God has blessed them in return with prosperity, safety, and stability.

But those blessings will quickly evaporate if the Poles ever turn their back on Christ as the rest of Europe has.