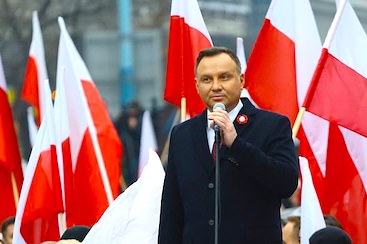 An assault on the Polish ambassador in Israel shows “hatred” fostered by Jews against Polish citizens, President Andrzej Duda told a rally in the city of Myslenice:

Israeli police said Wednesday they’d detained a man who shouted and spat at Ambassador Marek Magierowski outside the Polish embassy in Tel Aviv the previous day. Hours later, Duda called on Israel to explain the incident, which he said “humiliated” the envoy and condemned as an attack on Poland’s “pride and dignity.”

“Sadly, everything suggests that this was an anti-Polish act, an act of hatred against us — hate which is absolutely unfair,” Duda told a crowd in the southern town of Myslenice. “Just as I fight all instances of anti-Semitism, which I regard as something vile and unworthy, I will never agree to any anti-Polish act.”

The ruling Law & Justice party, which Duda represented in the European Parliament before running for president in 2015, is turning up its rhetoric ahead of the May 26 ballot to motivate more nationalist voters to participate in elections. Critics say the authorities are giving a voice to racism with their us-against-them approach that turns minorities, either religious or based on sexual orientation, into enemies.
Canceled Visit

The incident and Duda’s reaction come amid already thorny relations between Poland and Israel, mainly over the Holocaust and questions regarding Jewish property seized by the Nazis and the Communists last century. Poland’s Foreign Ministry abruptly canceled a visit by Israeli officials this week amid concern that talks would focus on restitution of real estate.

…In his speech in the southern Polish town, Duda said Poles had risked their lives to save Jews from the Nazis, becoming “heroes” by doing “decidedly more than is required by fairness and a moral code.”

“Nobody will offend us or put us down,” Duda said, prompting applause from the crowd in Myslenice. “We won’t allow it.”

Imagine if the roles were reversed, and an Israeli ambassador had been spit upon Poland.  It would be an international crisis that we’d never hear the end of.  Even when an everyday Jew anywhere in the world is allegedly spat upon, the worldwide press is alerted, and it’s treated as the beginning of “another” potential Holocaust.  But when a Jew spits on a Polish ambassador, it’s because the spitter was the “victim” of some kind of “antisemtism”, at least in his own mind.

But Poles are showing the rest of the world how to confront this jewish hypocrisy and obvious hatred: accuse the Jews of the Polish equivalent of antisemitism.  Instead of admitting that this anti-Polish hatred is unacceptable, the Jews will continue to try to spin this so that they appear to be the victim here somehow, and dig themselves into a deeper hole where they will find themselves with even less public sympathy.  When Jews accuse “gentiles” of antisemitism, are they ever interested in discussing why someone has negative opinions about Jews?  No, of course not, and the Poles don’t want to hear it either.