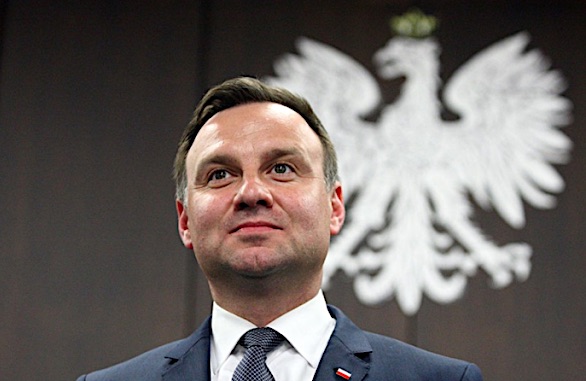 Polish President Andrzej Duda has withheld his signature on the paperwork needed to name jewish “scholar” Michal Bilewicz, whose academic specialty is pointing out ‘antisemitism’ in Poland, a professor at the University of Warsaw:

Under Polish law, the president of the country must ultimately sign off on awarding professorships.

Bilewicz, who has been heavily involved in combating anti-Semitism, racism and hate speech and studies anti-Semitic attitudes in Polish society, is the head of the Center for Research on Prejudice at the University of Warsaw. In 2018, the Central Commission for Degrees and Titles approved Bilewicz to receive the title of professor. In November 2018, the documents were sent to the Chancellery of the Polish President. However, they have not yet been accepted or signed.

A few days ago, while trying to set a date for consideration of the application, Bilewicz received a letter from the office of the president, which said that “the regulations do not specify the date on which the President of the Republic of Poland is obliged to issue a decision on granting the academic title of professor.” He posted parts of the letter on social media.

Bilewicz deals with the study of modern anti-Semitism and has been criticized by some Polish right-wing politicians. Attacks on him were particularly loud after Bilewicz’s participation in a conference at the Polin Museum of the History of Polish Jews in 2018, organized on the 50th anniversary of anti-Semitic campaign of March 1968. At the time, Bilewicz talked about hate speech and gave examples of contemporary anti-Semitism among Polish media, well-known celebrities and politicians. He said that thanks to anti-Semitism, some politicians are gaining popularity among voters. He was criticized for this by Polish nationalists.

Talk about jewish chutzpah, this hateful Jew spends his life attacking ethnic Poles for resisting the Judaization of Polish society, and then he cries “foul” when the Polish President isn’t exactly thrilled about awarding him his doctorate which will firmly entrench him in a university in Poland and give him an official platform to allow him to further spread his hatred of the Polish nation and people.

After all, an “antisemite” is anyone who doesn’t share the deluded image that Jews have of themselves.

Of course Duda will eventually sign off on this “doctorate”, but he wants to send an unmistakable message that he doesn’t approve of what this Jew is going to be doing in Poland.  The “evil” Germans would have sent him to nearby Auschwitz for a little re-education, but the more tolerant Poles would probably settle for a one-way ticket to Tel Aviv where he wouldn’t have to spend the rest of his life obsessing about ‘antisemitic’ ghosts.