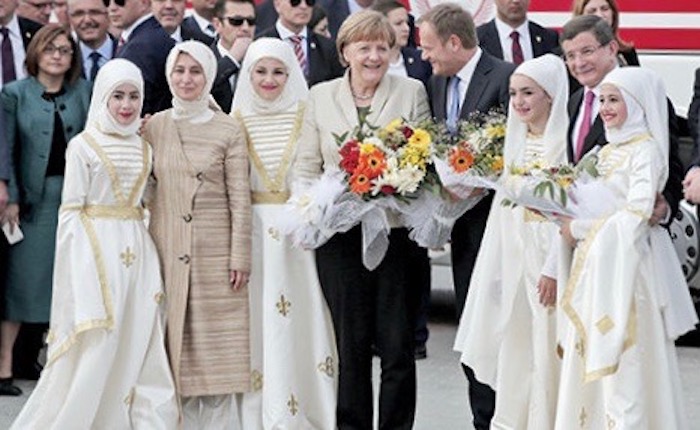 A recent poll among German voters revealed that Chancellor Angela Merkel is significantly more popular among people with migrant backgrounds than she is among her own ethnic Germans:

Chancellor Angela Merkel’s conservative bloc has become the most popular party among German citizens with migratory backgrounds, according to a report published on Thursday.

The Union bloc — made up of the Christian Democrats and their Bavarian sister-party, the Christian Social Union — now enjoys more then 43 percent of support among all migrant groups.

Meanwhile, only one-in-four migrants still favor the Social Democrats (SPD), down by a staggering 15 percentage points in just two years. Turkish-Germans in particular appear to have abandoned the center-left party, with most switching to the conservative bloc.

The survey, conducted by the Expert Council of German Foundations on Integration and Migration (SVR), divided Germany’s migrant population into four broad groups — those with Turkish roots, those with German roots who migrated from former Soviet states, EU migrants and those from the rest of the world.

Preferences between the different groups are evident: Turkish-rooted support for the SPD has plummeted by almost half in the past two years, from almost 70 percent to just 37 percent. It still remains the most popular party among that voter group, albeit only just. Support for the conservatives rose by 11 percentage points to 33 percent.

The anti-migrant Alternative for Germany (AfD) party was, unsurprisingly, the least popular party among migrant groups. Only 1.1 percent of Turkish-Germans said they backed the far-right party, although it did enjoy support from 12 percent of ethnic Germans from the former Soviet states.

Roughly a quarter of Germany’s 83 million-strong population is made up of either immigrants or Germans with migratory backgrounds — where at least one parent is a non-native German.

In the 2013 parliamentary elections, 9.4 percent of eligible voters had a migrant background. Four years later, that number had risen to 10.2 percent and continues to grow.

The fact that Merkel has any support whatsoever among any ethnic Germans is the real story here.  Despite doing everything she can to destroy the ethnic German population and replace it with Arabs, Africans, and mixed-race Turks, there are still Germans who support her suicidal policies.  The jewish denazification of Germany has been far more successful than anyone in 1946 could have possibly dreamed.

And it is Merkel’s nation-wrecking pro-migrant policies that will be the sole cause of any rise in so-called neo-Nazi activity in Germany.

Had it not been for this brown flood of rape, robbery, and murder, the White ethnic Germans would have stayed asleep and quietly accepted the slow cook of jewish socialism.

Merkel kicked the hornets’ nest, but she’ll take no responsibility for the coming racial violence.