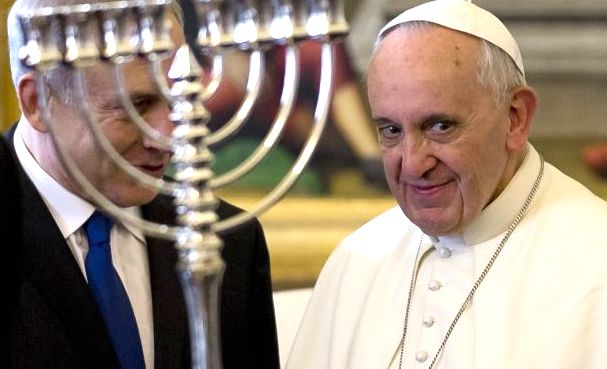 In the aftermath of the alleged shooting at the synagogue in Pittsburgh, the Pope is reassuring the jewish community that Christians “cannot be antisemites”:

Pope Francis lamented anti-Semitic attacks and remarked that “a Christian cannot be an anti-Semite” during an audience with Jewish emissaries on Monday.

The pope received four first time delegates of the World Congress of Mountain Jews at the Vatican.

Two weeks after the attack on a Pittsburgh synagogue that killed 11 worshipers Francis said in a statement: “Sadly, anti-Semitic attitudes are also present in our own times,” during his meeting with the emissaries of the Mountain Jews, the descendants of Jews who left ancient Persia and settled in the Caucasus.

“A Christian cannot be an anti-Semite; we share the same roots. It would be a contradiction of faith and life. Rather, we are called to commit ourselves to ensure anti-Semitism is banned from the human community,” he said.

The day after the Pittsburgh attack, the head of the Catholic Church said in his weekly prayers that “all of us are wounded by this inhuman act of violence.”

The Argentinian-born pope, who formerly was named Jorge Bergoglio and who was the former archbishop of Buenos Aires, was close to the victims of the terrorist attack on a Jewish target in his hometown.

Francis also told the Mountain Jews: “I have always sought to emphasize the importance of friendship between Jews and Catholics. It is based on a fraternity grounded in the history of salvation and it finds concrete expression in concern for one another. Together with you, I would like to offer thanks to the Giver of every gift for the blessing of our friendship, which is a reason and an impetus to mutual dialogue.”

He closed his remarks with “Shalom aleichem!”

It was the Catholic Church which initially invented the myth that Jews were the “spiritual elders” of Christians.  Prior to that, the Early Church Fathers considered any such notion that found common ground between Christianity and Judaism to be “judaizing” and was openly denounced.  Even the more recent concept of “judeo-Christian values” was fabricated as part of a propaganda campaign during WWII to convince Christians that it was in their interests to fight and die for jewish interests.

The Pope is merely continuing the open Catholic pandering to Jews since Vatican II in the early 1960 when jewish agents worked to fundamentally change the Church into a pro-Zionist, pro-Judaism institution.  The idea that real Christians can’t be antisemites flies in the face of the Catholic Church’s own history, prior to Vatican II, when it often was openly hostile to jewish interests, such as usury and the immorality peddled by Hollywood.  Up until recently, it was even Vatican policy not to acknowledge or visit the State of Israel, but that no longer is the case.

The Jews could not ask for a better friend than the Catholic Church today.