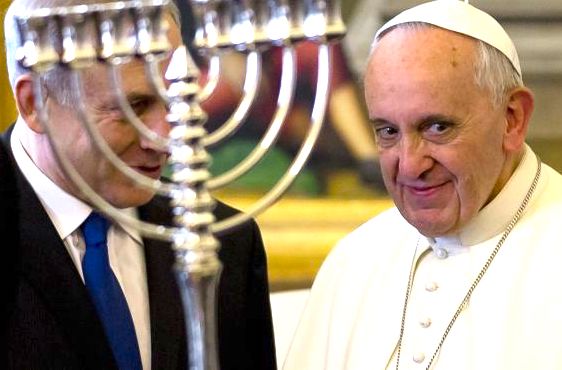 Pope Francis met with a powerful jewish lobbying group to denounce the “depraved hatred” behind a wave of anti-Semitic attacks in parts of the world and said interfaith dialogue can help counter it:

Francis met Friday with a delegation of the American Jewish Committee and praised their longstanding good relations.

He lamented that their meeting was taking place amid the spread of a “climate of wickedness and fury, in which an excessive and depraved hatred is taking root.”

And he warned that for Christians, any form of anti-Semitism is “a rejection of one’s own origins, a complete contradiction.”

The meeting came a day after the US House passed a resolution condemning anti-Semitism and other bigotry prompted by Rep. Ilhan Omar’s recent comments suggesting House supporters of Israel have dual allegiances.

The seven-page document details a history of recent attacks not only against Jews in the United States but also Muslims, as it condemns all such discrimination as contradictory to “the values and aspirations” of the people of the United States.

The audience also occurred days after Francis responded to longstanding requests from Jewish groups to open the Vatican archives of its World War II-era pope, Pius XII, who has faced accusations of having failed to speak out enough against the Holocaust.

Instead of reducing antisemitism, so-called “inter-faith dialogue” will ultimately increase it, as virtually everything Jews do to change White society into their own image ends up causing a backlash which Jews define as “antisemitism”.

The Catholic Church has a long and effective history of combating the encroachment of Jews upon Christian society, but apparently protecting the Christian flock from the ravenous Jews is now officially considered “antisemitism” by the self-hating Church and its Pope.

The allegation that Christianity has its origins in Judaism has no historical basis whatsoever.  Judaism, as a religion, did not come into being until well after the foundation of Christianity, so it’s impossible to claim that Judaism has anything to do with Christian origins.  The Pope is literally rewriting the history of Christianity and the Church itself when he claims that antisemitic Christians are “self-hating”.  Christianity is based on the rejection of the Jews both religiously and racially, which is why the Jews hate Christ and His followers.