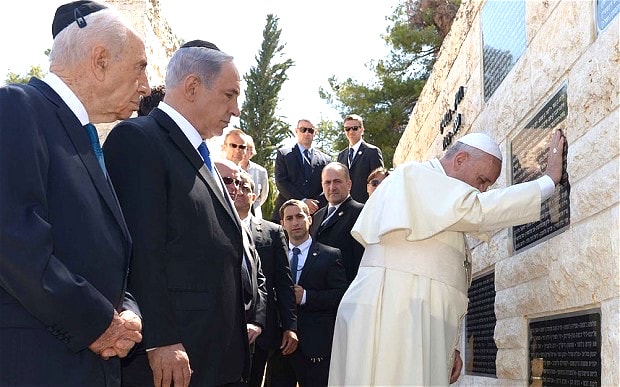 As part of his tour of the Baltic States, Pope Francis stopped at the former jewish ghetto of Vilnius and took the opportunity to lecture the Lithuanians on the dangers to criticizing Jews or their agenda for any reason:

As part of Vatican City head of state’s tour of the Baltics, Pope Francis visits former Jewish ghetto in Vilnius to remember Jews who were killed by Nazis and urges country, where neo-fascist parties are making gains, to refrain from temptation to be superior or dominant to others again.

Pope Francis warned Sunday against historic revisionism and any rebirth of anti-Semitism that fueled the Holocaust as he marked the annual remembrance for Lithuania’s centuries-old Jewish community that was nearly wiped out during World War II.

Francis began his second day in the Baltics in Lithuania’s second city, Kaunas, where an estimated 3,000 Jews survived out of a community of 37,000 during the 1941-1944 Nazi occupation. He ended it back in the capital, Vilnius, to pay his respects to Lithuanians who were deported to Siberian gulags or were tortured, killed and oppressed at home during five decades of Soviet occupation.

Francis honored freedom fighters at the former KGB headquarters where anti-Soviet partisans were detained and executed, solemnly touring the chambers that have now been turned into a haunting museum of occupation atrocities.

“In this place of remembrance, Lord, we pray that your cry may keep us alert,” he said. “That your cry, Lord, may free us from the spiritual sickness that remains a constant temptation for us as a people: forgetfulness of the experiences and sufferings of those who have gone before us.”

Francis recalled that Sunday also marked the 75th anniversary of the final destruction of the ghetto in Vilnius, which had been known for centuries as the “Jerusalem of the North” for its importance to Jewish thought and politics. Each year, the September 23 anniversary is commemorated with readings of the names of Jews who were killed by Nazis or Lithuanian partisans or were deported to concentration camps.

Francis prayed silently in the former ghetto and warned against the temptation “that can dwell in every human heart” to want to be superior or dominant to others again.

He prayed for the gift of discernment “to detect in time any new seeds of that pernicious attitude, any whiff of it that can taint the heart of generations that did not experience those times and can sometimes be taken in by such siren songs.”

Across Europe, far-right, xenophobic and neo-fascist political movements are making gains, including in Lithuania.

One might wonder why the Pope, who heads an institution which historically has opposed the Jews, is now lecturing Catholics on the dangers of criticizing the Jews or opposing their nation wrecking agenda.  It might be tempting to suspect that the Pope himself might be a crypto Jew, but to ask these questions would be antisemtic, so we won’t ask them.

Funny how the Jews claim that Vilnius was their “Jerusalem of the North,” but they also claim that all of Poland was at one time their “Promised Land”.  And Jews today claim that all of America is their “New Jerusalem”.  It’s almost as if anywhere that Jews live becomes sacred ground for them, which the heartless goyim defile with their “neo-Nazi” presence.