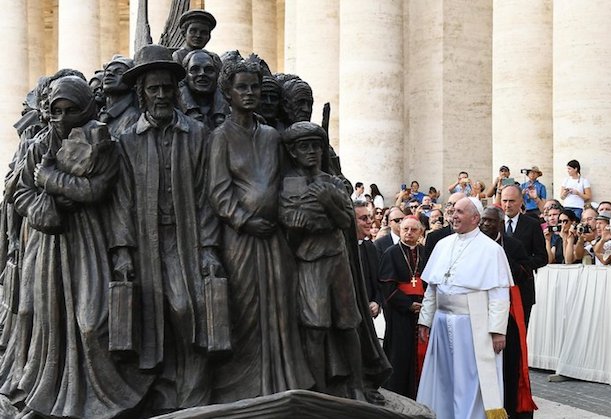 According to Crux Now, the sculpture shows 140 people from different cultures and periods: from indigenous peoples to Jews escaping Nazi Germany to Syrians and Africans fleeing war and famine today.

Stealing directly from Jewish sources about angels roaming the earth with messages for different people, the pope said the statue was inspired by a verse in the New Testament’s “Letter to the Hebrews,” attributed to Paul the Apostle and establishing that Jesus was, indeed the product of the extramarital affair of a Jewish woman from Nazareth and the deity. The verse that inspired the statue reads: “Do not forget to show hospitality to strangers, for by so doing some people have shown hospitality to angels without knowing it.”

Bells rang throughout the square as the sculpture was unveiled, and a multi-ethnic choir wearing T-shirts reading “It’s not just about migrants” sang….

“Welcome, protect, promote and integrate,” the pope said, and continued, “If we put those four verbs into practice, we will promote the integral human development of all people.”

He also said that individualism and materialism are producing a “globalisation of indifference” where “migrants, refugees, displaced persons and victims of trafficking have become emblems of exclusion” and are “considered the source of all society’s ills.” He cautioned that our fear of “migrants and refugees knocking on our door in search of protection, security and a better future,” would lead to intolerance, closed-mindedness and racism.

Sure, these Third World invaders are actually secret ‘angels’ sent by God to enrich Europe with diversity.

All these banal slogans are merely a vain attempt at putting lipstick on a pig — not one city or town in Europe has ever been improved by the presence of these “angels”; in fact, many have become violent “no-go zones” controlled by migrant organized crime syndicates who even intimidate the local police.

They make Chicago in the 1920s look relatively peaceful and safe.

And we can be sure that it’s just a coincidence that a Hasidic Jew — a Holocaust refugee — is at the front of the line of this statue of refugees.

It’s also worth noting that the ‘artist’ who created this piece of bronze propaganda, Timothy Schmalz, had gained international “acclaim” for his statue of “Homeless Jesus” — another piece of liberal manipulation which posits the idea that we should treat homeless people like the second coming of Christ, just in case that’s how He will choose to return.