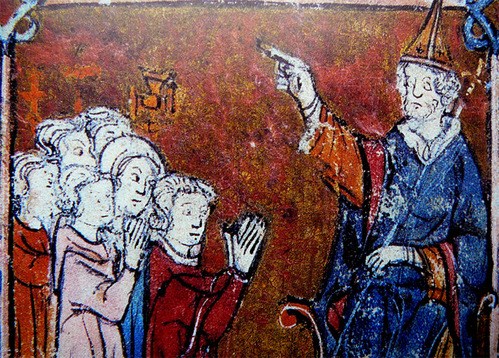 On November 27, 1095 at Clermont in France, Pope Urban II gave this speech that launched The Crusades and the eventual capture of Jerusalem.  The speech not only emphasized the Christian character of the coming Crusade but also the racial aspect of the conflict — God’s Christian Europeans against the pagan Arabs and their cohorts:

Oh, race of Franks, race from across the mountains, race chosen and beloved by God as shines forth in very many of your works set apart from all nations by the situation of your country, as well as by your catholic faith and the honor of the holy church!  To you our discourse is addressed and for you our exhortation is intended.  We wish you to know what a grievous cause has led us to Your country, what peril threatening you and all the faithful has brought us.

From the confines of Jerusalem and the city of Constantinople a horrible tale has gone forth and very frequently has been brought to our ears, namely, that a race from the kingdom of the Persians, an accursed race, a race utterly alienated from God, a generation forsooth which has not directed its heart and has not entrusted its spirit to God, has invaded the lands of those Christians and has depopulated them by the sword, pillage and fire; it has led away a part of the captives into its own country, and a part it has destroyed by cruel tortures; it has either entirely destroyed the churches of God or appropriated them for the rites of its own religion.

They destroy the altars, after having defiled them with their uncleanness. They circumcise the Christians, and the blood of the circumcision they either spread upon the altars or pour into the vases of the baptismal font. When they wish to torture people by a base death, they perforate their navels, and dragging forth the extremity of the intestines, bind it to a stake; then with flogging they lead the victim around until the viscera having gushed forth the victim falls prostrate upon the ground. Others they bind to a post and pierce with arrows. Others they compel to extend their necks and then, attacking them with naked swords, attempt to cut through the neck with a single blow. What shall I say of the abominable rape of the women? To speak of it is worse than to be silent.

The kingdom of the Greeks is now dismembered by them and deprived of territory so vast in extent that it cannot be traversed in a march of two months. On whom therefore is the labor of avenging these wrongs and of recovering this territory incumbent, if not upon you? You, upon whom above other nations God has conferred remarkable glory in arms, great courage, bodily activity, and strength to humble the hairy scalp of those who resist you.

Let the deeds of your ancestors move you and incite your minds to manly achievements; the glory and greatness of king Charles the Great, and of his son Louis, and of your other kings, who have destroyed the kingdoms of the pagans, and have extended in these lands the territory of the holy church. Let the holy sepulcher of the Lord our Savior, which is possessed by unclean nations, especially incite you, and the holy places which are now treated with ignominy and irreverently polluted with their filthiness. Oh, most valiant soldiers and descendants of invincible ancestors, be not degenerate, but recall the valor of your progenitors.

But if you are hindered by love of children, parents and wives, remember what the Lord says in the Gospel, “He that loveth father or mother more than me, is not worthy of me.” “Every one that hath forsaken houses, or brethren, or sisters, or father, or mother, or wife, or children, or lands for my name’s sake shall receive an hundredfold and shall inherit everlasting life.”

Let none of your possessions detain you, no solicitude for your family affairs, since this land which you inhabit, shut in on all sides by the seas and surrounded by the mountain peaks, is too narrow for your large population; nor does it abound in wealth; and it furnishes scarcely food enough for its cultivators. Hence it is that you murder one another, that you wage war, and that frequently you perish by mutual wounds. Let therefore hatred depart from among you, let your quarrels end, let wars cease, and let all dissensions and controversies slumber.

Enter upon the road to the Holy Sepulcher; wrest that land from the wicked race, and subject it to yourselves. That land which as the Scripture says “floweth with milk and honey,” was given by God into the possession of the children of Israel Jerusalem is the navel of the world; the land is fruitful above others, like another paradise of delights. This the Redeemer of the human race has made illustrious by His advent, has beautified by residence, has consecrated by suffering, has redeemed by death, has glorified by burial.

This royal city, therefore, situated at the centre of the world, is now held captive by His enemies, and is in subjection to those who do not know God, to the worship of the heathens. She seeks therefore and desires to be liberated, and does not cease to implore you to come to her aid. From you especially she asks succor, because, as we have already said, God has conferred upon you above all nations great glory in arms. Accordingly undertake this journey for the remission of your sins, with the assurance of the imperishable glory of the kingdom of heaven.

It couldn’t be more clear from this speech that Pope Urban was asserting that the Frankists were counted among God’s “chosen people,” as he makes a point of declaring them the descendants of the ancient Israelites who were originally given the “land of milk and honey” by God.

After the Scythian Israelites migrated out of the Levant up into Europe, the land was eventually taken over by pagan Turks, Muslim Arabs, and Jews — and the idea that these profane races of people were now occupying Jerusalem, the birthplace of Christianity, was completely unacceptable to Europe’s early Christians.

Pope Urban was not urging the Crusaders to go and convert these profane races to Christianity so that their occupation of Jerusalem would be acceptable to God; rather, he was commanding them to drive these enemies of God’s race out of the Holy Land at the point of the sword.

It should also be noted that the Pope was encouraging the Crusaders to lay aside their own internal conflicts with one another and join together against this common enemy–and this common enemy wasn’t just Islam or Judaism but rather the profane people themselves who were sullying the Holy Land with their mere presence there. 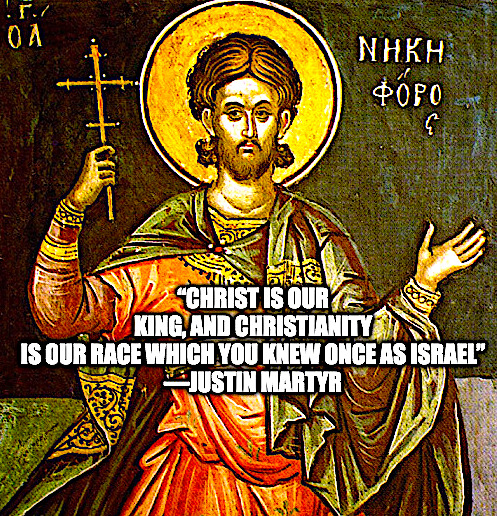