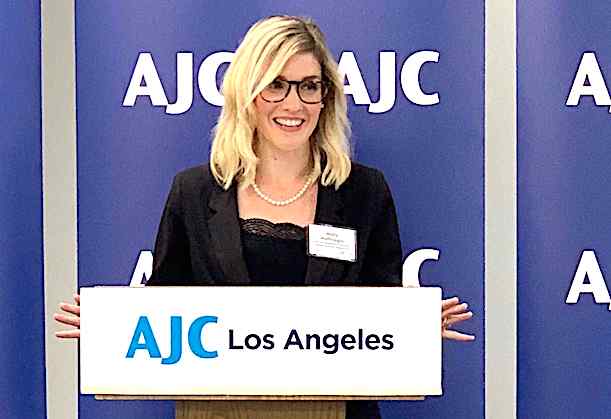 The American Jewish Committee, a powerful Jewish supremacy organization allied with the Anti-Defamation League, has recently hired Holly Huffnagle, a White Christian, to spearhead their antisemitism outreach efforts in the evangelical Christian communities in America:

A Christian now employed to help tackle anti-Semitism in the United States, she has more than one thing in common with the Jewish and pro-Israel community of late. On July 12, [Holly] Huffnagle was targeted by the anti-Israel group IfNotNow, which retweeted a post by the American Jewish Committee, where in April she was named its U.S. Director for Combating Antisemitism, claiming that she can’t be part of the fight against Jew-hatred.

“We welcome allies in the fight for Jewish safety—but it should be obvious that white Christians should not be leading Jewish organization’s advocacy against antisemitism,” tweeted IfNotNow.

Huffnagle previously served as the policy adviser to the Special Envoy to Monitor and Combat Antisemitism at the U.S. Department of State, and as a researcher in the Mandel Center of Advanced Holocaust Studies at the U.S. Holocaust Memorial Museum in Washington, D.C.

Huffnagle, 33, and her husband, Jason, currently live in Los Angeles.

JNS talked with Huffnagle by phone on July 14. The interview has been edited for brevity and clarity.  [She stated,]

It’s incredible that a Jewish organization is hiring non-Jews because anti-Semitism is mostly in itself by non-Jews. I think I have a better understanding, especially within Christianity, and I grew up as an evangelical Christian. I know that audience and my outreach can go even further.

Q: What’s your reaction to young evangelicals being targeted by anti-Semitic and anti-Zionist activists?

A: Of course, I’m disappointed. It’s important that we talk about the various sources of anti-Semitism, whether it’s the far-right or the radical left, or from religious extremists or sectors of other minorities. No matter where it comes from, when someone identifies as a Christian and talks about these anti-Semitic beliefs, I don’t think it’s a reflection of the faith that we’re supposed to be following.

This speaks much broader to when we see anti-Semitism coming from our own side—for me, coming from Christians. When I see anti-Semitism coming from Christians, I feel all the more committed to fighting that. It can come from the political level as well; when it comes to the Democratic Party and anti-Semitism, they need to call it out first before pointing fingers at the right and the right pointing fingers at the left. They need to tackle the issue within their own camp, and that’s something that we’re not seeing. It’s become very politicized. That’s another thing that AJC will be leading in continuing to make the fight against anti-Semitism bipartisan and calling out all sources of it vocally.

…But I think there’s been a misunderstanding in general about what it means to be Jewish. And unfortunately, the Jewish community is perceived as “white” or “privileged,” or embodying some of the tropes that exist not just within the African-American community or other minority communities, and even within “White America” that they have power, control and money.

Clearly, Huffnagle is a Judas Goat who has taken the Jews’ 30 pieces of silver in exchange for leading the Christinan sheep to slaughter at the hands of the bolshevik kosher butchers.

Basically, in the wake of the BLM riots and mayhem, where many of the Blacks have started talking about the hidden Jewish hand behind it all, the Jews have started to complain that antisemitism isn’t perceived by the public as ‘offensive’ as simple White-on-Black racism.

Jews want people ‘canceled’ for antisemitism in the same way they are canceled for ‘racism’.

Jews are ultimately working toward that moment when uttering the word “Jew” is as socially unacceptable as using “nigger”.

Of course, Blacks are never going to go along with that — they’d be lost without their race card — and Blacks still largely perceive Jews as just another type of privileged White people.

Now that Jews have successfully infiltrated the highest echelons of power in America by passing as White, they no longer want to be perceived as White — because they have targeted actual White people for cancellation and replacement — and they know it’s going to be a liability going forward continuing this charade as a so-called “White” person.

The words of American poet Emily Dickinson come to mind: “I am nobody.  Who are you?  Are you — Nobody — too?”