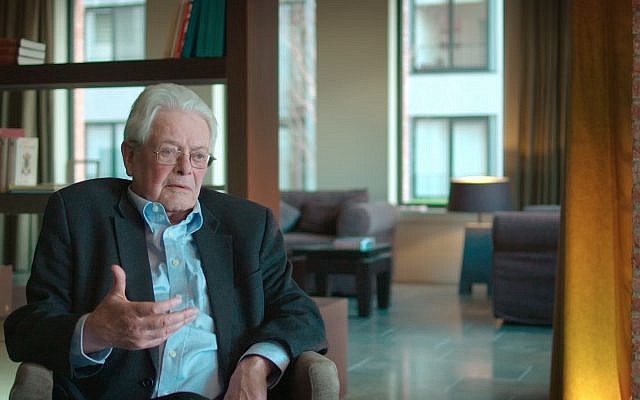 Instead of expressing the expected remorse and shame that Euro-Whites have been brainwashed into expressing, the son of a WWII Nazi collaborator threw the gloves off during an interview and told the television audience what he really thought of Jews and the official WWII narrative:

A professor emeritus from an esteemed university in the Netherlands whose father was a Nazi called Jews “parasites” in a televised interview.

Jan Tollenaere, a lecturer on medicinal chemistry who retired from the Utrecht University in 2001, also questioned the historical record on the Holocaust in an interview aired Thursday by the Canvas broadcaster in Belgium about children of Nazi collaborators.

Tollenaere, whose father, Raymond, was in charge of propaganda for the Belgian pro-Nazi collaborationist government of Flanders during the German occupation of Belgium in World War II, said Jews “are not a nice people, I don’t feel any warmth toward them.” They are, he added, “parasites, speculators and mean people.”

In the interview, Tollenaere described himself as an anti-Semite.

About the Holocaust, Tollenaere said: “Was it really a reality? I think there was propaganda in play to underscore the Holocaust, to exaggerate it and cynically use it, leverage it to extract money.”

A Utrecht University spokeswoman said her institution “fully and clearly distances itself” from Tollenaere, whom she described as a “former employee and nothing more.” But Tollenaere’s page on the university’s website does not make clear he is no longer active with the university or that he retired from it.

The professor emeritus title “is no honorary title and cannot be taken away, it simply means that he is a retired professor,” the spokeswoman said.

Asked whether, given his heritage, the university had looked into Tollenaere’s politics prior to hiring him, she said, “We don’t judge people according to their parents; that would be unfair. We look at faculty and prospective faculty according to their actions.”

Oh, Antisemitism, where is thy sting?

It would seem that this incessant smearing of everyone as an antisemite is having the opposite effect that the Jews intend — people have tired of it, and now just don’t care if you call them an antisemite anymore — the epithet no long carries any stigma for many people who are fed up with the hypocrisy and lies that are being forced down our collective White throats by the jewish media.

The Jews will look into every avenue to exact their vengeance against this honest and candid man, but if they had any sense of self-preservation, they would just let the matter drop and move on.  But the Jews invented the apt term “obsessive-compulsive,” so don’t expect them to let this one go anytime soon.