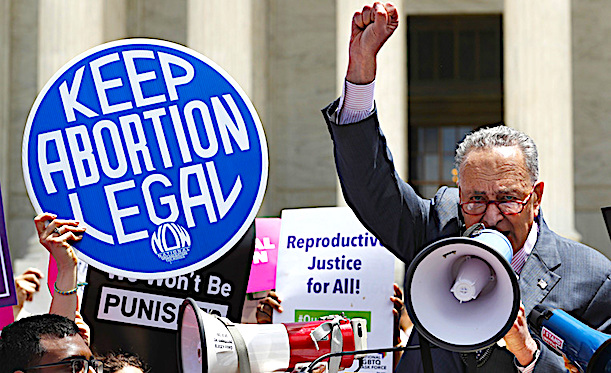 Chuck Schumer, one of the most rabid and unwavering pro-abortion advocates in the U.S. Senate, has managed to avoid any scrutiny in the mainstream media for his support for Efrat, an anti-abortion group for jewish women in Israel:

An Israeli anti-abortion group is reaching out to Christian Zionists and pro-choice advocates in the United States in an effort to increase the state’s Jewish population. American Friends of Efrat, the U.S.-based fundraising arm of Efrat (no relation to the settlement of the same name), is an Israeli anti-abortion group with hundreds of volunteers that counsel Jewish women against abortion and provide support for the first year of the child’s life.

While in the U.S. pro-life discourse focuses on morality, the American Friends of Efrat looks at abortion from a demographics perspective. Their advertisement for the Committee to Rescue Israeli Babies (C.R.I.B.) program—Friend’s of Efrat’s only project—markets what they call an “inner aliyah,” or increasing Israel’s Jewish population not by flying in new immigrants, but by pumping up the birthrate via anti-abortion counseling and subsidies.

Though Efrat only assists women in Israel, the group has garnered support from inside the beltway through its American partner. Senator Chuck Schumer, a noted pro-choice champion who has used the issue of abortion to secure his New York Senate, attended a 30th anniversary gala for Efrat. Schumer has been lauded by Planned Parenthood who called him a “hero,” with “a 100% pro-choice, pro-family planning voting record,” but in 2007 Schumer put his pro-choice position aside and joined his anti-abortion foes at the celebration. (Schumer’s office was contacted, but did not provide a comment for this story.)

…According to IRS 990 tax reports, the American Friends of Efrat pulls from mainstream foundations including matching donations from Deutsche Bank, The Goldman Sachs Foundation and the Prudential Foundation.

..[Last] winter when Efrat won a prize for their dedication to the Jewish community, Israelis protested. “[T]hey are saying a woman’s ovaries are a political tool,” said Tzaphira Allison Stern to the Jerusalem Post last December at a demonstration outside of the Jerusalem Prize ceremony. “Why shouldn’t a woman have an abortion? Because we need the baby so there are more Jews, and so there are more Israeli soldiers, so we can defend the land and continue the occupation,” she continued.

The leaven of the jewish Pharisees was their hypocrisy, and that age-old truth continues today as just another jewish ‘canard’ that even the Pope is now insisting is merely an antisemitic ‘trope’.

If the mainstream media weren’t completely dominated by jewish interests, this story about Schumer’s hypocrisy would have been front page news when it first appeared, but then again, claiming that the Jews control the media is a ‘conspiracy theory’ that Schumer would like to make a jailable offense.

And even though this story also proves Senator Schumer does indeed have dual loyalties, to even discuss these facts is pure antisemitism, according to the Anti-Defamation League.

Clearly, this hypocrisy goes beyond the treacherous Chuck Schumer and extends to the pro-abortion jewish population in general, which provides a substantial amount of financial support for this program.

“Abort your babies, Goyim, it’s your right.  You go, girl!  But every Jewish baby is sacred.”