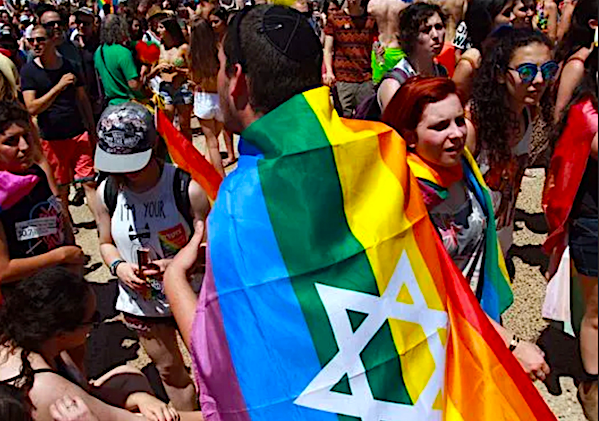 Bentzi Gopstein, the leader of the conservative group Lehava, said Tuesday his organization plans to disrupt this week’s Jerusalem Pride Parade in order to fight what he called “LGBT terrorism”:

Gopstein said his Lehava organization has received a police permit to stage a protest near the annual parade on Thursday and would use loudspeakers to disrupt the marchers who “are bringing disaster to Israel.”

“The purpose of the march is to dissolve the values ​​of the Jewish family and to turn Jerusalem and all of Israel into Sodom,” Gopstein said in a statement.

Lehava opposes intermarriage and the assimilation of Jews and LGBT rights and tries to stifle any public activity by non-Jews in Israel. Lawmakers across the political spectrum have tried to designate it as a terrorist group.

Gopstein is a member of the far-right Otzma Yehudit party, which united with the Jewish Home and National Union ahead of April’s elections to form the Union of Right-Wing Parties. The merger was orchestrated by Prime Minister Benjamin Netanyahu in order to salvage votes for the right-wing bloc, which he said would have been wasted had the hardline parties run on their own and not crossed the electoral threshold.

Also on Tuesday, the right-wing conservative group, Hazon (Vision), posted signs around the city protesting same-sex marriage. The posters espouse traditional values and counter the LGBT movement with the slogan “Father and Mother = Family. The courage to be normal.”

Rabbi Noa Sattath, director of the Israel Religious Action Center, blasted the Hazon posters as “incitement,” telling Channel 12 news the conservative group was “against anyone who does not hold their dark and violent worldview.”

“We will continue to fight for justice and equality,” said Sattath, an LGBT rights activist and one of the organizers of the Jerusalem parade. “We demand a thorough examination of the sources of funding for this incitement organization. No one knows who is financing Hazon and why.”

Uri Banki, whose daughter Shira was stabbed to death at the 2015 parade, called on the public not to be deterred and come to the march.

“If the good stays silent and sits at home, the evil will raise its head,” Banki wrote on his Facebook page.

The Jerusalem parade is one of dozens of events around Israel during Pride month. Police hope to prevent a repeat of the violence that marred the 2015 parade when an ultra-orthodox man, who had just left prison after serving 10 years for a stabbing attack on the 2005 parade, stabbed a teenager to death and wounded several other people.

Israel’s national police force said it “will act decisively against anyone” who tries to disrupt the march, adding uniformed and plainclothes policemen will be deployed along and around the parade route in central Jerusalem.

Only in Israel can conservatives express these “radical” pro-family ideas and not be publicly excoriated, get fired from their jobs, and become socially ostracized.

And keep in mind, Israel has one of the world’s largest and most powerful LGBT communities.

Despite that, so-called “conservative Jews” still publicly can voice not only opposition to the LGBT agenda, but also characterize it for exactly what it is, which is “domestic terrorism”.

But as Lehava points out, in order to stop the LGBT steamroller, people need to have the “courage to be normal,” but the sad reality is that in western countries, where the jewish-dominated radical Left controls the social narrative, normal people have been intimidated and cowered into silence where no voices opposing this agenda are allowed.

And when no public debate about this agenda is allowed, violence can indeed erupt — and when people react violently, even more draconian measures of repression are instituted by the thought police.