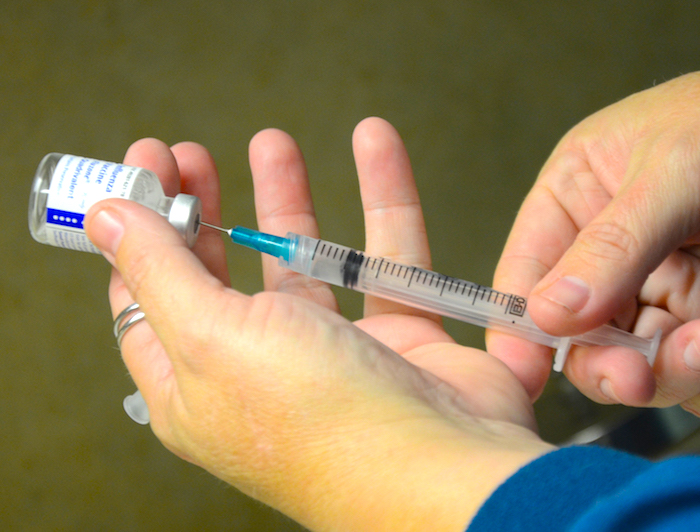 In an op-ed piece promoting vaccination among religious Jews, Dr. Alan Kadish and Dr. Edward Halperin make the astonishing claim that SSPE/autism can be caused by the measles virus:

Opposition to vaccination on political and religious grounds has been swaying parents across the country to refuse immunizations for their children. Recently this has resulted in two of the largest measles outbreaks in New York’s history, impacting haredi Orthodox Jewish neighborhoods. The opposition to vaccines is not confined to the Jewish community, but represents part of an ill-informed nationwide movement opposed to vaccines.

As of last week there were 24 confirmed cases of measles in the Brooklyn neighborhoods of Williamsburg and Borough Park, and an additional 75 people in Rockland County had contracted measles as well. Additional cases are under investigation, and the number is expected to rise.

Childhood vaccines preserve health, prevent disease and save lives. Proper vaccination is an essential public health strategy and parents must be made aware of the scientific research on this critical issue.

Members of our faculty reported in the New England Journal of Medicine on the ability of the childhood viral disease mumps to spread rapidly among children in the close quarters of yeshiva study halls. Similarly, measles seems to thrive in these conditions…

…Measles may cause pregnant woman to give birth prematurely or to have a low-birth-weight baby. Subacute sclerosing panencephalitis (SSPE) is a rare fatal disease that results from a measles virus infection acquired earlier in life. SSPE generally develops seven to 10 years after a person has measles, even though the person seems to have fully recovered. The risk of developing SSPE may be higher for children who get measles before they are 2 years old.

Several Jewish legal authorities have weighed in on requiring children to have vaccines or allowing religious exemptions for school children to avoid vaccination. Recently, in response to the outbreak of measles in the United States and Israel, many have called for universal vaccination. However, there still appears to be some resistance to requiring universal vaccination. One Jewish legal opinion written three years ago justified refusing vaccines on the grounds that the risks of contracting measles were low. These medical “claims” were erroneous then and are erroneous now.

If you look in older editions of Harrison’s Principles of Internal Medicine from the 1970s and earlier, you will find that the description and symptoms of subacute sclerosing panencephalitis (SSPE) are virtually indistinguishable from what we call autism today.  Just like autism, SSPE affected young boys far more than girls; it first appeared at 2 years of age; and according to Harrison’s, its most likely cause was “vaccinia” or an adverse reaction to childhood vaccinations – see this article for more information. 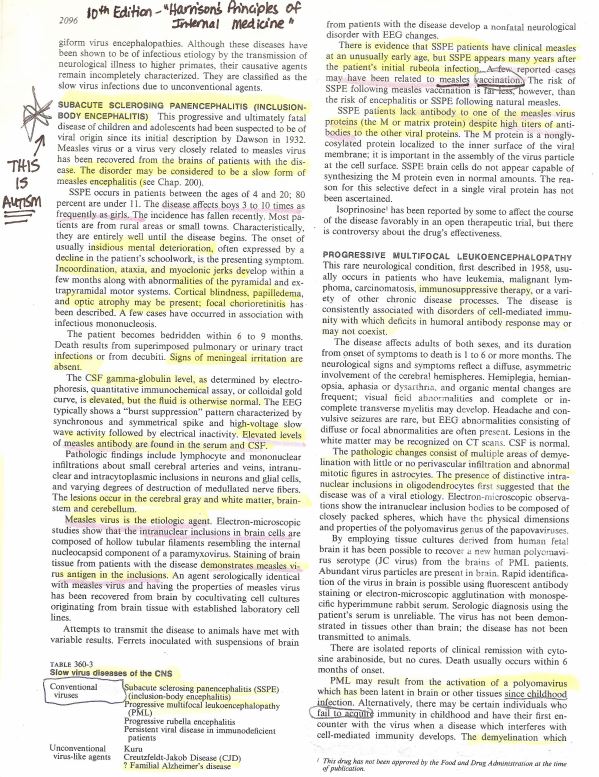 So this op-ed piece completely contradicts what Harrison’s originally stated about SSPE, even going so far as to claim that it is now a “fatal” disease in order to scare parents into vaccinating their children with the very vaccine that causes autism.

The pro-vaccine propagandists had to make sure that people believed there was a real difference between autism and SSPE, even though their symptoms and disease progression were virtually identical, because medical researchers had already established that SSPE was caused by vaccines.  And once the autism epidemic went full-swing in the 1990s, Harrison’s quietly changed their definition of SSPE in later editions so that its connection to autism had plausible deniability.

Reality has gotten so inverted that medical doctors can now claim with a straight face that the measles virus actually causes SSPE/Autism when, in fact, it is the measles vaccine itself that is one of the primary culprits, a fact that was known over 40 years ago but has been cleverly hidden from the all-too-trusting public.