Quebec To Ban Jews From Wearing Yarmulkes in All Government Buildings 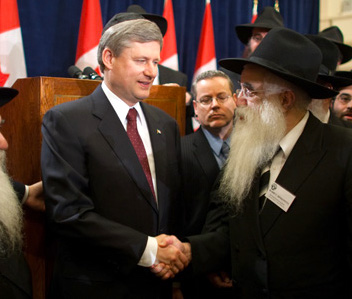 Quebec has introduced a bill that bans some public employees from wearing religious symbols at work, including kippahs:

The measure is intended to reinforce the separation of church and state, but critics say the real target appears to be Muslims and their hijabs.

The Quebec parliament tabled the “secularism bill” on Thursday introduced by the right-leaning coalition government of Premier Francois Legault.

Among those who would be affected are teachers, police officers and judges. Along with kippahs and hijabs, Sikh turbans and crucifixes would be prohibited.

The Jewish community is wary.

“We are very concerned with the new Quebec government’s statements regarding a ban on religious symbols displayed by government officials and displayed in public institutions,” said Harvey Levine, the Quebec regional director of B’nai Brith, suggesting the notion is “at odds” with Canadian values.

“We call on the [Quebec government] to avoid the slippery slope of diminishing fundamental rights and work instead to secure religious liberties for all Quebecers.”

As an apparent sop to critics, the legislation has a grandfather clause that allows workers who now wear religious symbols to keep them on, and will remove a prominent historical crucifix in Quebec’s National Assembly. But new public workers in “authority” positions could not wear religious symbols — they risk dismissal if they do not follow the ban.

This is typical blowback that Jews experience as they push their diversity agenda forward.  Liberals, because they truly believe in nothing that can’t be voted away, will eventually subvert themselves as they try to subvert the perceived “Establishment”.  But because most liberals do not understand that liberals are the New Establishment.  The old American WASP establishment has been replaced by the Jewish Establishment, or “Our Crowd” as Stephen Birmingham’s book calls them.

By targeting their Arab/Muslim kissing cousins, the Jews end up curtailing their own “freedoms”, such as ritual slaughter for meat, genital mutilation of children, and religious head wear.  Canadians, of course, being the notoriously “polite” people they are, will probably never muster the nerve to tell any Jew to remove his yarmulke, regardless of the law against it; that is, unless they want to be smeared as an antisemite.  There are laws for Jews and other laws for everyone else, so says The Talmud.