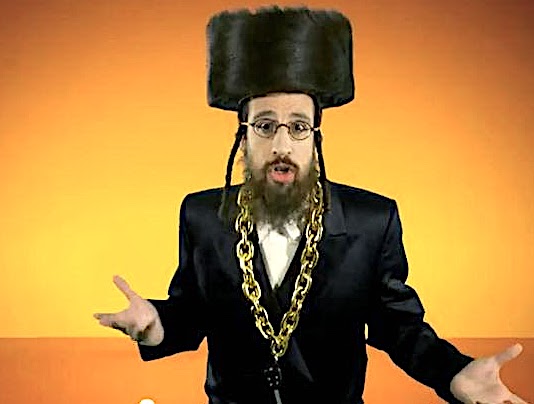 (Chabad.org) According to the website of the powerful Chabad Lubavitch Jews, of whom President Trump’s son-in-law Jared Kushner is a member, embracing hypocritical “double standards” is fundamental to the way Jews live their lives and perceive the world:

One example of an ethical double standard is the different ways in which we regard tragedy, depending on who is the victim. When something bad happens to myself, the Torah tells me to trust in G‑d’s help, justify His ways, and examine my ways for what I might have done wrong so that I may learn a lesson from what occurred. Which are precisely the things I’m not supposed to do regarding someone else’s troubles…

But perhaps the most fascinating — and important — double standard in Judaism is in the way we apply the Divine commandment “Do not kill.”

Placing an infinite value on every human life means an utter rejection of any “scale” by which to quantify and qualify its worth. The life of an infant with disabilities has the same value as that of the wisest person on earth.  An 80-year-old “vegetable” cannot be sacrificed to save the life of a 20-year-old genius.  The Talmud tells the story of a man who was threatened by the hoodlum that ran his city that he’d be killed unless he kills a certain person.  The great sage Rava told this man: “What makes you think that your blood is redder than that person’s blood?”

Torah law goes so far as to rule that an entire city cannot be saved by giving up a single individual.  Because each and every life is of Divine — and therefore infinite — significance.  Ten thousand infinities aren’t any “more” than one infinity…

In light of the above, it is surprising to find the following law in the Torah (derived from Deuteronomy 22:26): Habah l’hargecha hashkem l’hargo — “If someone is coming to kill you, rise against him and kill him first.” (This law applies equally to someone coming to kill someone else — you’re obligated to kill the murderer in order to save his intended victim.)

This law seems to contradict the principle of life’s infinite value.  If no life can be deemed less valuable that any other, what makes the victim’s life more valuable than the murderer’s life?  Furthermore, this rule applies to anyone who is “coming to kill you” — he hasn’t even done anything yet!  Maybe he won’t succeed?  Maybe he’ll change his mind?  Nor does the law say anything about trying to run away.  It says: If someone is coming to kill you, rise against him and kill him first.

The same Torah that tells us that G‑d placed a spark of Himself in every human being, thereby bestowing upon his or her physical existence a G‑dly, infinite worth — that same Torah also tells us that G‑d has granted free choice to every person.  Including the choice — and the power — to corrupt his or her G‑d-given vitality and turn it against itself, using it to destroy life.  A person can choose to turn himself into a murderer — someone who is prepared to destroy life in order to achieve his aims.  In which case he is no longer a life, but an anti-life.

To kill an anti-life is not a life-destroying act, it is a life-preserving act. It is not a violation of the commandment “Do not kill,” but its affirmation. Without the law, “If someone is coming to kill you, rise against him and kill him first,” the principle of life’s infinite value is nothing more than an empty slogan, a mere idea.

Judaism is not an idea. It is a way of life — G‑d’s ideas made real.

Notice how this rabbi cleverly equates “The Torah” with “The Talmud” — the naive Christian believes that these “religious” Jews study the same book as them — the first five books of the Bible — the “Torah” or the “Pentateuch”, but this is a lie that traces its origins back to the occult pagans of Babylon — the true origins of Judaism.

To the rabbinical scholar, the Talmud always takes precedence over the Torah — the actual Bible — because the opinion of the rabbis is more important than the actual word of God.

The purpose of the rabbi — or the “traditions of the elders” —  is to make the word of God to no effect.  (Galatians 5:4)

There is no evidence in the actual Bible that we should ever embrace “double standards” or endeavor to undermine the true intent of God’s word, but that’s exactly what the entire Talmud is about — the rationalization of hypocrisy, which is at the heart of Judaism.

When God says there is a “time to kill” and a “time to heal”, He’s not creating a “double standard”, except in the mind of a Jew.

Jews should never be allowed to be anywhere near a real Bible, let alone comment on it.

This is why pointing out Jewish hypocrisy — which is literally full-time job — has no effect on Jews — it’s like water running off a duck’s back.

Once again, Christ (Matthew 16: 6) is proven correct — the “leaven of the Pharisees” is indeed hypocrisy.

Christians are warned that a “double-minded” man is unstable in all his ways. (James 1:8)  Those who are double minded are far from God (James 4:8).

And yet Pope Francis is now trying to rehabilitate this traditional Christian ‘antisemitic’ image of the hypocritical Pharisees.

The Pope wears a yarmulke for a reason, dear Christians. 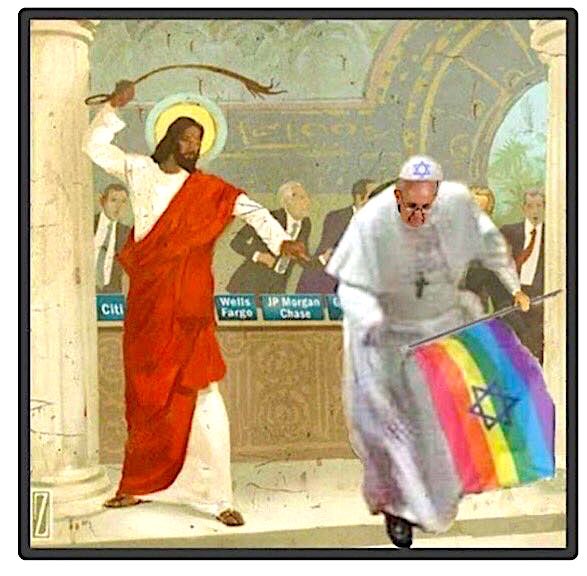