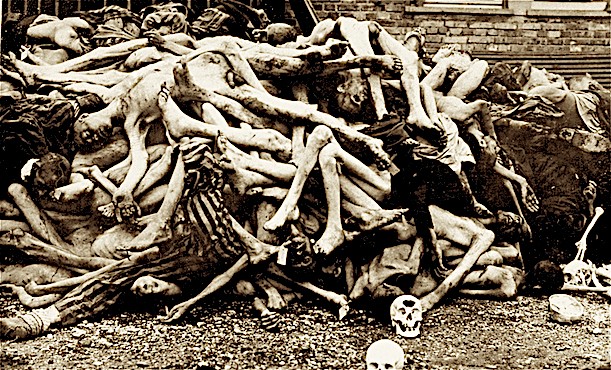 Like Eva Clarke who claims she was born when her mother was literally in a cart on her way to the gas chambers, Rabbi Joseph Polack is one of the youngest “Holocaust survivors” — and even though he was too young to remember anything about actually being in the camps, he’s written a “memoir” about it anyway — which won a  National Jewish Book Award.

In 2016, Rabbi Polak gave a lecture about his book at the College of the Holy Cross sponsored by the Kraft-Hiatt Program for Jewish-Christian Understanding, in which he described his macabre childhood “memories” of Bergen-Belsen:

“I was a kid — I wasn’t quite three years old — when the war ended.  I was born in ’42 — the war ended in ’45.  So I was an infant — a toddler.  A friend of mine — friends of mine — um — from Bergen-Belsen — remembers me running around Bergen-Belen as a toddler.  What was there to play with — in Bergen-Belsen?  What was the camp filled with — in December ’45 — I’m sorry — December ’44 — January ’45 — February ’45?  The camp was filled with corpses.  When the British liberated Bergen-Belsen — there’s a controversy — I don’t know the exact numbers — between 15 and 30 thousand dead people lying around Bergen-Belsen — stacked like cord wood.  And the children played hide and seek around the corpses.  Eli Wiesel told me that when he went after Buchenwald to Paris — and he — um — where he lived and got his life back together — he said it took him months for him to get used to the fact that there weren’t bodies everywhere.”

Hide And Seek With Corpses

We will not even address the fact that even young children have a natural aversion to anything dead — and wouldn’t  have gone anyhere near “stacks of corpses” as if it were totally normal.

These young “Holocaust survivors” have a credibility problem — since they were too young to be credible witnesses to the “horrors”, they have to create a narrative where others provide the “eye witness” testimony to what they themselves “saw” but were too young to remember.

And example of this is Eva Umlauf who claims to have miraculously survived Auschwitz — exactly like Eva Clarke — claiming that her transport was the first one that didn’t go directly into the gas chambers — the “gassing” had miraculously stopped a couple days before her pregnant mother arrived.

With Rabbi Polak, he creates the existence of a nameless imaginary “friend” who provides the actual “eyewitness” testimony of seeing him as a “toddler” playing with other children in the piles of corpses.

These “friends” must have been much older than Polak and have also been inmates at Bergen-Belsen — but he doesn’t explain how he miraculously came to know these “friends” later in life — Holocaust survivors often claim to miraculously meet other survivors who shared their experience.

How did these “friends” know that it was Polak — as a toddler — whom they saw playing with other children among the corpses?

He obviously didn’t remember doing it — so how and why did these “friends” even bring up the toddlers playing with corpses when they finally met him — how did that incident come up in conversation?

We know that Polak is confabulating because of certain verbal cues — for example, he gets the dates wrong about when the camp was liberated — facts he clearly learned by reading books about it after the fact.

Polak is also wrong about the numbers of dead bodies — the majority of inmates died AFTER the dates he gives, and after the camp was liberated.

But in December of 1944 when he claims to have played around the stacks of tens of thousands of bodies, only 360 deaths in the camp are documented — so he’s completely confused or he’s outright lying — and he may not even know the difference.

He also makes up the imaginary “friend” who saw him there — and then creates more “witnesses” by increasing the witnesses from “friend” to “friends” — unconsciously sensing that his story would need more credibility.

And notice how he uses the expression “there was a controversy” — an unconscious acknowledgment that the entire Holocaust narrative is controversial — and he’s part of that larger controversy.

In the clip above, listen to how Polak’s voice changes at the end when he says, “And the children played hide-and-seek around the corpses” — he clearly says it as if he’s afraid that his audience isn’t going to believe him.

Finally, he brings the Saint of Auschwitz — Eli Wiesel — into his story to give it ultimate Jewish imprimatur of credibility — well, if Wiesel believed his story — and they had similar “memories” of corpses — then Polak’s incredible tale is officially kosher.

Enough research has been done on Eli Wiesel’s ever-changing testimony to clearly show that he was a pathological liar who probably never even set foot in Auschwitz — which is why he never allowed anyone to see his imaginary tattoo.

And so instead of giving Polak’s tall tale credibility, invoking Wiesel serves only to create even more reasonable doubt — not only for Polak’s narrative but for the edifice of the entire official narrative which seems to crumble away with every year that passes.