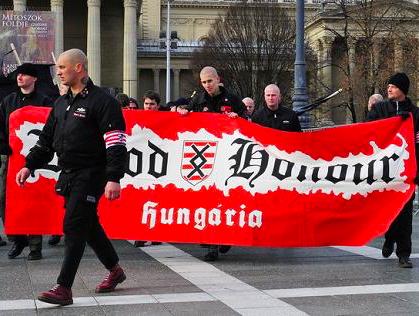 Jewish leaders in Hungary have spoken out against the failure of the government and police to stop the neo-Nazi marches which took place last Saturday in the capital of Budapest, drawing an estimated 2,800 far-right extremists bearing swastikas and other fascist symbols:

Former defense minister Avigdor Liberman criticized the Hungarian police for failing to stop the marches, while Rabbi Pinchas Goldschmidt, president of the Conference of European Rabbis, described the “indifference” of the Hungarian authorities as “shocking.”

The marches, labeled the “Day of Honor,” commemorated the defeat of the German army and the armed forces of the fascist Hungarian Arrow Cross regime at the hands of the Soviet Red Army in February 1945, with participants honoring the memory of the Nazi and fascist forces which died in battle.

Speaking to The Jerusalem Post, Rabbi Zoltan Radnoti, chairman of the rabbinical council of the Mazsihisz Jewish Federation in Hungary, said that such marches are extremely frightening for the Jewish community.

“It very much pains us that neither the authorities nor the police did anything to stop this march,” said Radnoti.

“Jews do not want to see people dressed in Nazi uniforms,” he continued, saying that there were various legal tools the police could have used to prevent the march. “The government and police must stop these marches. It is not fitting for Budapest, for Hungary, or for a government which says it wants to protect the Jewish Hungarian community, and which says it has zero-tolerance for antisemitism, but allows these marches.”

Officials in the Mazsihisz Federation itself, an umbrella organization for the Neolog denomination – somewhat akin to Conservative Judaism – stated that the march was unacceptable, adding that it was “a step down that the Hungarian authorities” permit such demonstrations.

“For the Hungarian Jewish community and for the vast majority of Hungarian citizens, it is frightening that Budapest was a place again for neo-Nazi commemoration and march[es],” the organization stated on Monday. “A neo-Nazi demonstration that flames hatred, equipped with SS-skulls [and] marches in formation is unacceptable, whether it is [taking] place at the Városmajor [Park] or at the Buda Castle’s Kapisztran Square.”

The Hungarian government is not worried about these “far right extremists” because they know full well that these people are not violent or dangerous, and therefore, there is no need to stop them from exercising their freedom of speech.  Why are Jews so nervous around “neo-Nazis” who give them their raison d’etre?  If it weren’t for the constant specter of antisemitism, what would the Jews talk about?  How would they scare their fellow Jews enough to leverage donations to fight the “Nazis”?

What this article fails to mention is that Jews in Hungary actually report the lowest levels of antisemitism of any country in Europe and that Jews overall feel very safe there, but that’s a rather inconvenient truth that would make the point of this entire propaganda piece look even more ridiculous.  Nazis are openly marching in the streets of Budapest, but Jews feel safer here than in any other European country.  Go figure.