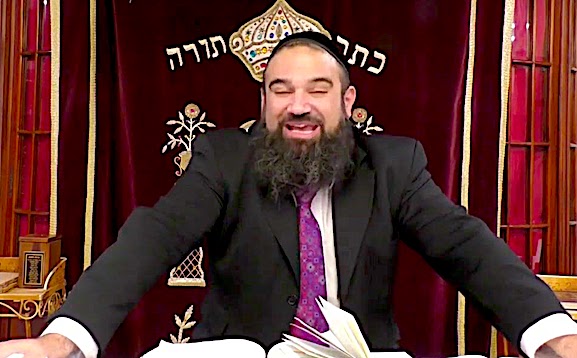 On his May 16, 2019 show, “Stump The Rabbi,” Rabbi Yaron Reuven explained how just as the Jews in Weimar Germany in the 1920s and 1930s destroyed the German economy through usury, Jews in America are today recreating the same economic conditions through rapacious usury in the ‘cash advance’ industry, which, if not stopped by the government, will lead to a Holocaust of Jews living in America:

Who knows the first two laws that Hitler implemented?….that not only put him in a different status than everybody else for history but also made what’s called up until this the day the greatest financial miracle in history?  Who knows the first two laws [that Hitler implemented]?….Rule number one: no more pornography. No more homosexuality. None of that garbage. Not allowed. Berlin in the Thirties, in the Twenties, was the Sodom and Gomorrah of the day. It was the Las Vegas of the day….homosexuality, pornography….bestiality, all the garbage of the world. That was the capital of the world. He outlawed it, and he no longer allowed….closed all the bars, all the gay clubs, all the production, all run by jewish people. Unfortunately.

Second rule: second rule was you’re not allowed to charge interest. No more interest. Now you would think, “Why? Why does he care about interest?” Well, cause all the people that had the money, that lent the money out were Jews. He didn’t like it. He said no more interest. Why? Because of the high interest that the Jews charged people, was so high, it ruined and destroyed the economy in Germany. It destroyed it.

[Hitler] saw that the Jews were controlling the financial system, and they are charging such high interest, they destroyed the German economy. To the extent that by the time you arrived to go to the store to buy bread, you had to take a whole horse carriage full of money. By the time you arrived at the store, it wasn’t enough. Why? Because the inflation was so high. The bread became so much more valuable and your money went down. So now he says “What’s this? The cause of this?” Because nobody could afford to do anything because the interest rates are so high. So he decided no more interest rates. Not allowed to charge interest rates.

This is one of the biggest reasons of why he hated Jews. Because they destroyed the economy, because of their greed. It’s not making him right. Don’t let this confuse you. But this is happening again.

This is going to be a huge blow up to the extent where you can see how Edom, just like the Torah says, Edom is going to come back again, Edom becomes America….Why? Because America is Edom after all. But you’ll see what happens. And you’ll see all of a sudden the six million Jews that are in America feel comfortable, that are sometimes in government, that are sometimes in politics, that are running big businesses, and so on and so forth, guess what? The same exact thing happened in Germany….In Greece same thing. In Rome same thing. In Egypt same thing. But guess what? We get greedy. We get sinful….

This, for sure, is a “Ah ha moment”.  Unless the government, by mercy of Hashem, interferes with that industry and completely ruins it, we will see a Holocaust starting from this business.

Of course, fake Jews like this rabbi refer to all white nations — Rome, Germany, and even America — as “Edom” — one of the biblical enemies of the ancient Israelites.

The problem with this paradigm is that today’s Jews are not real Israelites — while the white nations they call “Edom” actually are comprised of many of the living descendants of those 12 Tribes of Israel.

And the rabbi is warning his fellow Jews that they should not take this current prosperity and power for granted.  Unless their financial empire based on usury is destroyed, the Jews are facing a real Holocaust this time, not one that happened only in their minds, like the one in World War II.

The above-quoted comments begin at 1:15:00 into the program:

A backup abridged version can be seen here: