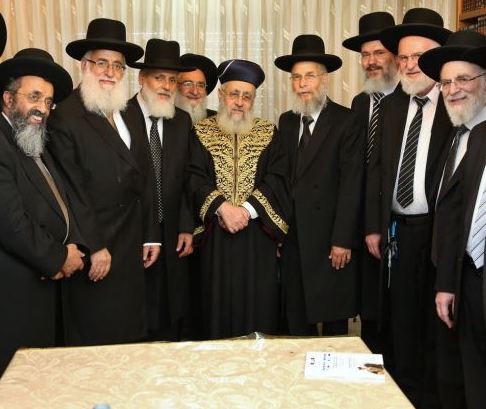 An Israeli rabbinical court has refused to recognize an American-Israeli man’s “jewishness”, despite approving the conversion to Judaism of his sister over two decades ago, according to the advocacy organization representing him:

The man, whose family moved to Israel from California, also received an affirmation of his Jewishness from the Beit Din of America, which was rejected by the rabbinical judge against Chief Rabbinate directives, ITIM charged in a letter to Ashkenazi Chief Rabbi David Lau on Tuesday.

The man’s mother and sister converted to Judaism in California in January 1980 — before he was born — and he was raised in an Orthodox home, ITIM said. The Tel Aviv rabbinical court recognized his sister’s Judaism in 1996, allowing her to get married in the country where personal status issues are handled by the Chief Rabbinate.

But despite documentation submitted to the court showing its previous decision, a rabbinical judge did not authorize his Jewishness for the purposes of marriage, the organization said.

A request submitted by ITIM for an extension to file an appeal to the decision was also rejected without explanation, it said, accusing the judges of placing minute procedural concerns over the pursuit of justice.

ITIM director Rabbi Seth Farber slammed the decision and the court’s refusal to recognize the Beit Din of America’s approval. The rabbinical court is one of several dozen recognized by the Chief Rabbinate for the purposes of conversion to Judaism and divorce.

“This is an intolerable situation in which the State Rabbinate is discriminating against converts, disregarding its own standards, violating Halacha, and defying normative Orthodoxy,” Farber said in a statement.

In November, the Chief Rabbinate for the first time named the Orthodox rabbinical courts in the Diaspora recognized by the state-run religious authorities, after a lengthy legal battle.

The list of the non-Israeli bodies approved for conversion includes some 70 Orthodox rabbinical courts around the world, half of them in the United States. It also signed off on 80 rabbinical judges, whose activities are overseen by the US Rabbinical Council of America and the Beit Din of America.

As long as Jews continue to insist on playing their jewish identity shell game, these kinds of controversies will continue.  Clearly, this man is not a racial Jew because neither of his parents were racial Jews, and just because his mother “converted” to Judaism doesn’t make her a racial Jew, and if she isn’t a racial Jew, then her son doesn’t automatically qualify as a racial Jew, according to jewish “law”.  And just because his sister mistakenly got away with it doesn’t mean that the rabbinical court has to make the same mistake with him.

But this man seems to be in “jewish purgatory”; that is, he is recognized as an Israeli citizen, but he’s not considered jewish enough to qualify for marriage to a racially jewish woman.  What this case reveals is really quite simple: you have to have some racially jewish DNA to be a Jew.  Merely attending synagogue and wearing a yarmulke will not magically turn you into a Jew.  You’re either born with some DNA that comes from a Jew or you’re not.  And since a majority of Jews aren’t religious, they won’t automatically lose their “jewish identity” simply because they don’t go to synagogue or fail to wear a yarmulke.