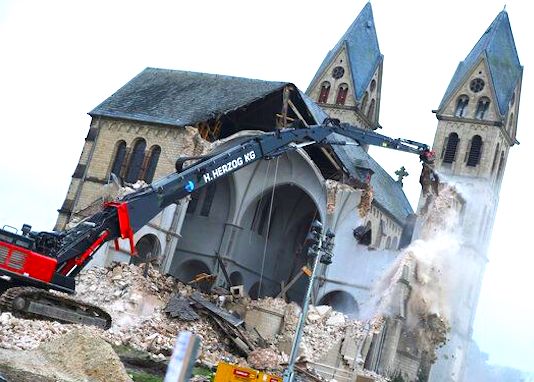 Giulio Meotti, a fanatical pro-Zionist journalist in Italy, who has a habit of attacking high-profile fellow Jews, like Stephen Spielberg, because they aren’t as supportive of Israel as he would like, has written an article gloating over the slow and steady death of Christian Germany and its replacement with Islam:

In 2001, then Cardinal Joseph Ratzinger told Peter Sewald: “The church will be reduced numerically. In a city like Magdeburg the percentage of Christians is only 8 percent of the total population, including – mind you – all Christian denominations. The statistical data show irrefutable tendencies”.

Since 2000, the Catholic church in Germany has desecrated, demolished and sold 540 churches and chapels. Of these, 80 were in Magdeburg.  In the diocese of Essen, Bishop Franz Hengsbach saw the number of Catholics halved, so 57 churches were abandoned. In the diocese of Hildesheim, as many as 51 churches have been deconsecrated since 2008.

17 years have passed since that Ratzinger interview and the data has almost collapsed everywhere. From “irrefutable”, the numbers seem to have become irredeemable.

This is due to demographic decline and dropouts. In the north and east of the country, Christians will be only a small minority with 3.8 and 1.5 million, respectively. The main Protestant churches already saw their percentage halved from 59 to 29 per cent. And today, as Erik Flügge explains in a new book, “90 percent of church members do not participate in community life”.

The demolitions will not stop at 540 churches. “We are just beginning this development”, said Albert Gerhards of the University of Bonn. “If there is no rethinking, a sharp increase in demolitions is foreseeable in the coming years”.

In Europe’s most important country, Andreas Püttmann, a researcher with the Konrad Adenauer Foundation, wrote a book in which he called the situation Gesellschaft ohne Gott, the society without God.

But he is wrong.

Christianity is dying. but Islam is rising.

It might be tempting to dismiss Meotti’s celebration of the demise of Christianity in Germany as a “fringe” opinion among Jews, but that would be a mistake, as the jewish-controlled media has been virtually silent on this issue, which suggests a tacit approval of the islamification of Germany.

Jews have been telling each other that Christianity has been the primary source of their alleged “oppression” for the last 2,000 years, which is why they can’t wait to see it literally wiped off the European social and cultural landscape.

But they should be careful what they wish for.

And even though the rise of Islam in Europe has brought with it an increase in violent antisemitic attacks on Jews, they seem to be willing to deal with that minor inconvenience as long as their more formidable enemy, the White Christian population, is marginalized and ultimately erased from history.

Jews and Muslims have a long history of both cooperation and coexistence in the conquest of Spain, along with the former Christian lands of the Middle East.

Jews are far more tolerant of Muslim ‘antisemitism’ than they are of its Christian manifestation for one obvious reason — one is a real threat and the other is not.