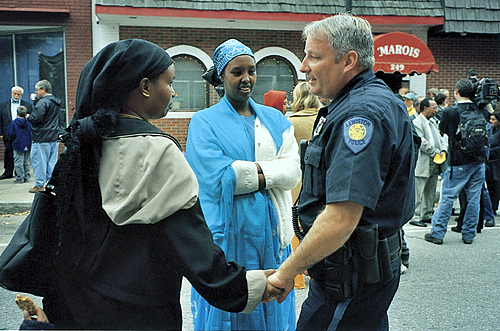 The violence and crime resulting from the huge influx of Somali migrants into Lewiston, Maine, has been escalating, but the lack of police response has forced a town hall meeting to discuss the problem, at which the Somalis brazenly declared that they are in Lewiston to stay:

In an abhorrent display of ignorance and arrogance, Somalian immigrant leaders show their lack of appreciation for their American hosts and claim ‘We are what makes Maine great!’.

One woman even asks why they should have to assimilate to our American culture?

Why? Because when two very different cultures are forced to share the same set of laws, conflict become inevitable.

Another woman claimed, “We are not going anywhere, whether you like it or not!”. This kind of aggressive and threatening posture has absolutely no place in our society.

Worst of all, the Somalians have already started bringing group violence with them.

It couldn’t be more obvious that the police in Lewiston have been ordered from higher ups to stand down and not aggressively enforce the law with this Somali criminals.  We see the same phenomenon all over Europe where migrants roam the streets with no fear of the police, and they know that even if they are arrested, the courts will be very lenient toward them.  The only way “diversity” experiments like this one in Lewiston can “succeed” is if the police don’t enforce the existing laws otherwise most Somalis would have a criminal record, and their children would be kicked out of every school.

While Americans are distracted about the funding for Trump’s Wall, hundreds of thousands of migrants like these Somalis are being flown into the heartland of America legally.  They are immediately given generous public assistance and welfare courtesy of the White taxpayers.  Our legal system is there to protect them, not prosecute them, no matter how egregious their crimes.

These migrants are weapons of mass destruction, not the result of a misguided attempt to improve America with diversity, as we have pointed out in numerous articles: