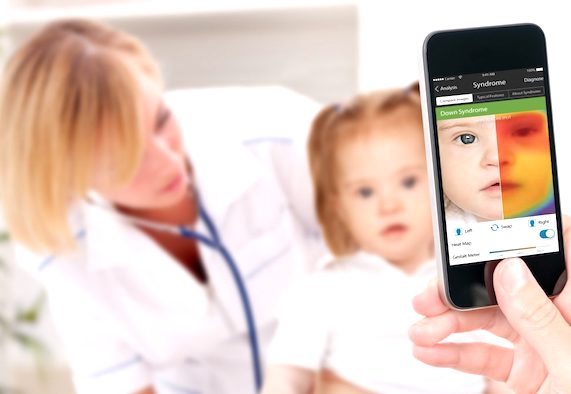 A new AI-powered smartphone app called Face2Gene could improve the lives of patients with certain genetic abnormalities, but only if they are White:

Eighty percent of rare diseases are caused by abnormalities in a person’s genes. And the thing about rare diseases is that they’re often difficult to diagnose, and in many cases, fewer or no treatment options are available.

A new AI-powered smartphone app called Face2Gene could improve the lives of patients with these conditions.

Face2Gene app can outperform doctors at diagnosing rare genetic disorders in children by analyzing their face. The app is available for anyone to download, but it is designed for use by healthcare professionals. Although, this hasn’t stopped angry parents from airing their grievances about the app’s exclusivity on the Apple App Store.

The app is the brainchild of Boston-based digital-health company FDNA. According to a paper published in the journal Nature Medicine, the team trained Face2Gene’s deep-learning algorithm to identify rare genetic mutations by feeding over 17,000 images of people diagnosed with rare, genetic syndromes.

When researchers tested the app on 502 photos it hadn’t seen before, the app provided the correct diagnostic guess roughly 65% of the time. And when considering multiple predictions, the correct one made the app’s top ten list 91% of the time.

Researchers also tested the app’s diagnostic abilities against those of 49 clinical geneticists in an unofficial trial. Only two of the clinical geneticists provided correct diagnoses for more than 50% of the photos while Face2Gene correctly diagnosed seven out of the ten children…

The app also needs more diverse training to correctly diagnose photos with non-Caucasian faces. In a 2017 study, it was found that the app could identify Down Syndrome with 80 percent accuracy if a photo features a white Belgian child, but couldn’t peak 37 percent accuracy if it featured a black Congolese child.

Face2Gene’s user base has exploded since the app was released in 2014 – more than 70 percent of clinical geneticists worldwide use it.

A number of Artificial Intelligence programs have been shown to have “racist” tendencies or biases, which have been blamed on the “racism” of the programmers who unconsciously pass on their “racism” to the computers.  If you program a computer to understand that racial differences are real and exist, and most people with any common sense believe, then you can’t turn around and instruct the computer to not recognize those differences because they are politically incorrect.

And if computer truly does have the ability to think for itself, then it will not only notice racial differences, it will come to the conclusion that those differences are significant and immutable.  As with people, no matter how much pro-diversity propaganda that you inundate them with in the media, many will be able to see through it and understand how it’s all based on lies and myths of equality.  And if people can figure that out, so can AI computers, no matter how much p.c. programming goes in.