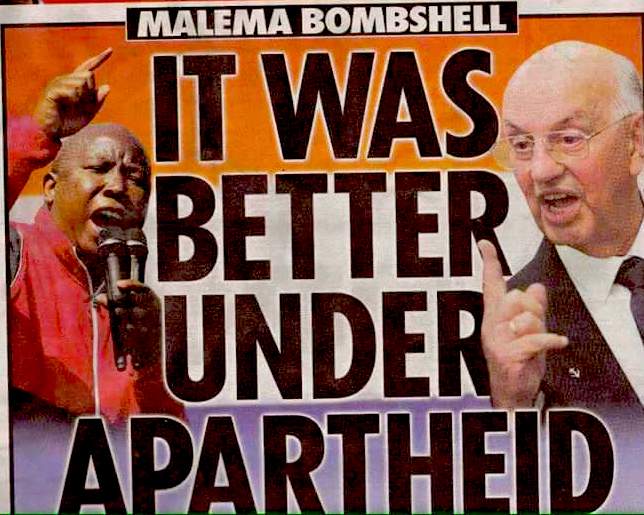 (Daily Vox) Taking a page out of the EU playbook which makes doubting any aspect of the so-called Holocaust a criminal act, a number of South African radicals, like Ayesha Fakie, want to make denying the “evils” of Apartheid a jailable offense:

The International Criminal Court’s Rome Statute defined apartheid a crime against humanity in 2002, rightly making South Africa’s white ethno-nationalist horror take its place alongside other systematic global regime-led terrors seen in the annals of international justice. Yet in the physical, psychological and juridical confines of the nation state we call South Africa, far right extremists and other historical revisionists propagate lies and myths about apartheid and the scourge of white hegemony’s role in South Africa.

Germany has famously made Holocaust denialism a crime on the deep reflection, by the international community and Germany itself, of the latter’s role in the genocides and war crimes the Germans are infamous for. It is an acknowledgment of the genocidal crimes and wounds inflicted by Germany on its various victims, especially Jewish people, and a recognition that the physical and psychosocial nation state needs to never forget, never go back.

These laws are still in effect even 70 plus years after 1945; even Twitter is bound by different rules and moderation there in being compelled to clamp down on Holocaust and Nazi revisionism which attempts to garner sympathy in the name of Hitler, Goebbels and their modern day successors in the far-right white nationalist cottage industry seemingly poised to become a global multinational spanning Eastern Europe, South Africa and the USA. (You know the names, I choose not to type them out – deplatforming them from their internet soapboxes is how we pull back the norms of civil space, and it should be a lesson to media houses here and internationally to do the same).

…No sooner after the New Yorker decision went public were the wails from people who never suffer from the harm inflicted by ignorant, race exclusionary, white nationalist, eliminationist, hate speech thundering through the chattering classes. “What about a marketplace of ideas!?” “Well if his arguments are so poor why not counter them with better ones!?” “Freedom of speech means we all have a right to…..” and on and on and on. I’m sure the Bauers of the world were readying their “If we don’t believe in freedom of expression for people we despise, we don’t believe in it at all” again, probably more so when calls like mine for apartheid denialism to be criminalised are made…

Living, working, just being in this place called South Africa is a daily battle for the majority South Africans, most Black South Africans – the peoples directly attacked by apartheid’s venom – to claim some semblance of living and dignity. And for revisionists to – in living memory of apartheid – gallingly talk without penalty or consequence via apartheid denialism and nostalgia is a compounding of a crime against humanity, an affront, an insult by people who benefit directly from the privilege of race and economics that apartheid bequeathed them.

…For those apartheid othered, excluded, attacked and abused, for those of us who survived, and those still trying to survive, hearing apartheid denialism is a smack in the face. It is society telling us we don’t matter. It is telling us it can happen to us again. It is telling us to know our place. Seeing the apartheid flag, hearing Die Stem even – especially acted out in performative victimhood by washed out entertainers – is an exercise in social PTSD. No idealised norm of freedom of speech, especially in its absolutist sense as if it is given to us from on high by an omniscient being, is worth that price.

We see this phenomenon over and over again with Liberals — the second they gain power after exercising their freedom of speech, they want to censor their opponents and call any political opposition “hate” or “racism”.

These Black radicals in South Africa have been taught all the politically-correct jargon from their Judeo-Marxist overlords.

If you substituted “people of color” for “jewish people,” you’d get the exact same impulse to censor and crush their opponents.

The last thing they ever would want to acknowledge is that many Blacks actually had better lives under Apartheid — and that idea is soon to be criminalized.

Of course, the purpose of ‘Apartheid Denialism’ is to silence Whites who would oppose their own displacement — and Whites who try to appeal to the self-interest of Blacks by suggesting that Blacks could benefit from sharing power with Whites.

And if Blacks believe they were better off under Apartheid — and many do — they will be called “self-hating” or “counter-revolutionary.”