Ramaphosa ‘Clarifies’ the Difference Between Land ‘Grabs’ and Land ‘Expropriation’ 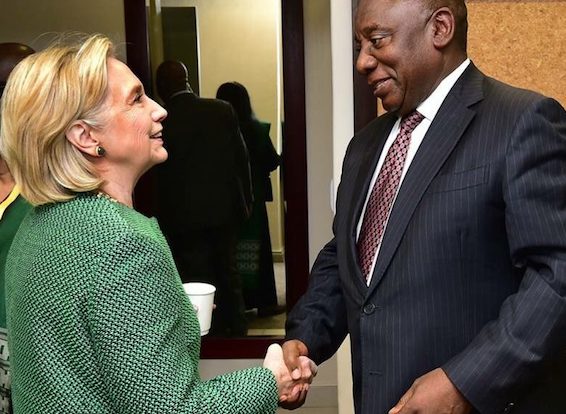 South African President Cyril Ramaphosa has been working hard to allay international concerns that Blacks will simply continue to murder Whites and steal their land as they have promised to do:

Cyril Ramaphosa had an international audience to entertain in Sandton on Thursday, and he was quick off the mark assure the crowd that land grabs are not on the expropriation agenda.

Esteemed dignitaries and speakers – including Hilary Clinton and David Cameron – were present for Ramaphosa’s speech at the Discovery Summit 2018 in Sandton. The delegation were there to talk about leadership, the current political climate, and investment opportunities.

Classic Cyril, chasing those dollar bills once again. The president stayed on-message and moved to allay any outstanding fears about land expropriation in South Africa.

[Ramaphosa stated,] “We will not allow this to lead to degradation of economy. We won’t allow land grabs. As we heal this wound, we will do it how Mandela taught us. We must have discussions, and reach agreements that contribute to social cohesion and nation building.”

“The current focus on accelerated land reform is therefore a vital opportunity to address economic exclusion. Land reform is not only about correcting a grave historical injustice; it is also an absolute economic necessity.”

These days, when Cyril talks about land expropriation, he’s frequently addressing international listeners. He’s made no secret about his plans to bring foreign investment flooding into Mzansi, and has spent most of his eight months in office convincing other nations that SA is open for business.

He has largely stuck to his script, too. Whether attending G7 summits, entertaining other leaders, or addressing the UN, Ramaphosa has been at pains to express that land grabs are not a part of expropriation. For many, the shadow of Zimbabwe still looms large.

It would seem that Ramaphosa has a team of advisers telling him what to say so that the South African economy doesn’t go into complete collapse over something stupid that comes out of his mouth.  He continues to lie to the public by denying that White lands aren’t being “grabbed” and will continue to be “grabbed”.  Rather, he explains the land is being “expropriated” not “grabbed”.  The difference should be obvious to everyone.  If the land is merely “expropriated,” the international business community will continue to have confidence in Ramaphosa’s “leadership”.

But Ramaphosa assures us all that theft of White land is an “absolute economic necessity,” meaning that if White land is not stolen, the South African economy is somehow in jeopardy.  If poor Blacks with no skills or experience aren’t handed valuable White lands, there is not future for Blacks in South Africa.  After all, if Blacks aren’t just given White lands, how else will they ever get it?  They surely can’t be expected to work hard, save up their money, and buy that land like the Whites did.  If Blacks aren’t allowed to “expropriate” the land, they will remain “oppressed”, and we can’t have that.