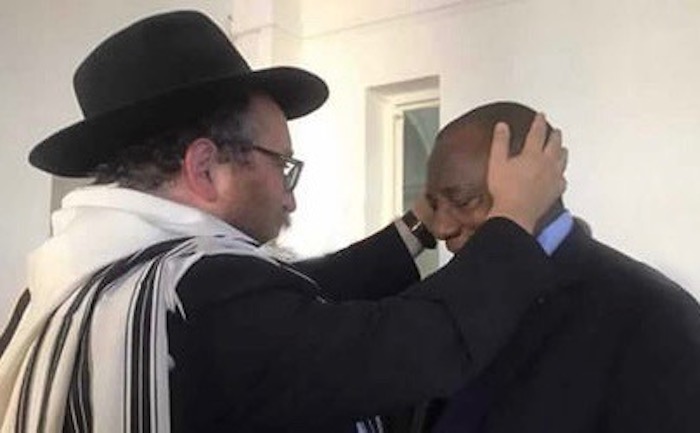 President Cyril Ramaphosa recently gave a speech to large group of  influential South African Jews in which he assured them that his land confiscation scheme will be peaceful:

President Cyril Ramaphosa on Wednesday asked the Jewish community to join hands with the government in taking the country forward, assuring those who owned land that a solution addressing land reform would be found.

“We want to say that we would like the land reform process to unfold within the framework of our Constitution and to be underpinned by the rule of the law, and [it] should be implemented in ways that will broaden economic growth,” he said at the Gardens Shul in Cape Town.

“More importantly, it should be implemented in a way to promote social cohesion among all South Africans.”

Ramaphosa said many land owners were fearful and looked at reform as an intractable problem.

He said the same was said of apartheid but South Africans proved critics wrong by finding a lasting solution. He believed the same would happen with the land, through reconciliation and negotiation.

Referring to the land issue as a “wound” that had continued to fester, he said it needed further attention by being “dressed up, stitched and healed permanently”.

“Through the parliamentary process, we are certain we will arrive at a solution that provides clarity and certainty.”

Accepting an invitation to join celebrations for Rosh Hashanah (Jewish New Year), Ramaphosa was met with thunderous applause when he touched on the fight against corruption, the quest to bring about peace in the Middle East and his hope for a brighter future for South Africa.

He didn’t miss a beat when he greeted the packed synagogue with “Shalom” and even demanded that Chief Rabbi Warren Goldstein drop off a copy of the Talmud (religious text) so he could place it next to the Torah in his study.

Ramaphosa acknowledged the role that the community had played during apartheid and continued to play today in “every crevice of South African life”.

Goldstein warmly welcomed Ramaphosa and referred to him as a “true mensch”.

“Your election as leader of the ANC and elevation to the president of South Africa is a great victory for freedom and democracy and the hope of a brighter future for all,” Goldstein said.

In other words, Ramaphosa will continue to steal land owned by White farmers, but he will take special care not to disrupt any jewish property owners, very few — if any — of whom actually own and operate farms.  And in return the only jobs that Jews will create are useless government jobs that employ otherwise unemployable Blacks.

This meeting seems to be a tacit quid pro quo to the South African jewish community — Ramaphosa knows full well that it was the Jews who were instrumental in dismantling Apartheid and putting Blacks like himself in power.  And he also knows that if jewish property is seized during his “wealth redistribution” scheme, that there will be hell to pay.

The question is: how is Ramaphosa going to educate South African Blacks to know the difference between a White and a white-appearing Jew?  If the average Black can’t make that distinction, the Jews will all be on the next plane to Tel Aviv when all breaks loose.