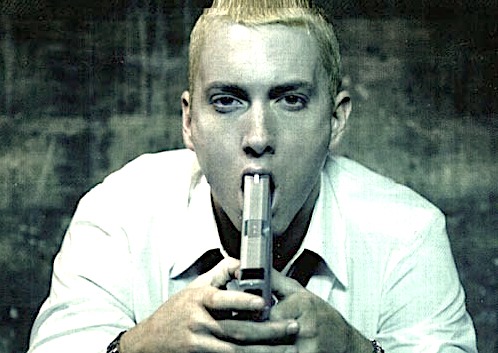 Middle-aged millionaire White rapper Eminem admitted in a 2017 interview he feels so “embarrassed” about being White that it’s driving him to have suicidal thoughts:

In his new rap album “Revival,” Eminem moans that it is really “embarrassing” being a white person and says he thinks about “checking out on life” and killing himself because he “can’t escape this circumstance.”

Informationliberation.com reports: “Seems like the average lifespan of a white man is more than twice than a black life span,” Eminem says. “I wonder sometimes if it has a price scanner.”

“I feel like checking out on life, can’t escape this circumstance,” he says.

Eminem’s new album is being widely panned by critics, despite its anti-white lyrics and attacks on Donald Trump.

Music review Chase McMullen said Eminem’s “crusade on Trump and white privilege is fiery and perhaps admirable,” but added: “It’s truly unfortunate the music behind the ideas makes Revival the most abrasive and unlistenable he’s ever sounded.”

While Eminem’s music was perhaps edgy at one time in the 90’s, his song “Untouchable,” which appears to be the most popular song on his new album, pushes the same black victimization narrative you could hear repeated without controversy in any Fortune 500 boardroom.

After 20 years of pathetically attempting to establish “street cred” among Blacks as an edgy rapper, Marshall Mathers, aka Eminem, has developed what appears to be a serious mental disorder where his White skin causes him such extreme mental anguish that he’s threatening to commit suicide.  Cynics might be tempted to claim that this is just a crass attempt to grab headlines to resuscitate a career that flat-lined over 10 years ago, but his entire career has been centered around getting the approval of Blacks in America’s ghettos.

Unfortunately, the vast majority of his fans are not Black but rather White middle class kids who also think imitating the lowest echelons of Blacks in America is “cool”, and those misguided and relatively affluent White kids are the ones who have made Eminem the multi-millionaire that he is today.  If Eminem had been lucky enough to appeal only to Blacks as he so desperately has wanted, he’d still be living in that Detroit trailer park and hating his White skin for a whole other reason: that it makes him an obvious target for violent Black crime.