(Canadian Broadcasting Corporation) The RCMP raided the rural Manitoba house of a military reservist who is suspected of frequenting a survivalist website that advocated preparedness for a possible upcoming civil disturbance:

No charges have been laid against Master Cpl. Patrik Mathews, a member of the Winnipeg-based 38 Canadian Brigade Group, but both RCMP and the military are investigating his alleged ties to The Base, an organization that promotes hate.

Mounties descended on Mathews’s home in the rural town of Beausejour, about 50 kilometres east of Winnipeg, late Monday, ordering him out of his house.

In a video of the raid, posted to Facebook a short time later, a voice can be heard saying: “Patrik Mathews, we have a search warrant for this residence. You can exit the back door with your hands in the air.”

RCMP said later they searched a house in Beausejour and seized a number of firearms, but no one is in custody at this time…

Sarah Lockhart, who lives across the street, said dozens of police officers and a tactical team were at the home across from hers around 10:30 p.m. CT.

“He came out quietly,” she said. “It took them about five minutes to get him out…”

The Department of National Defence is investigating claims that Mathews, an eight-year member of the 38 Canadian Brigade Group, is involved in a neo-Nazi group.

If the allegations are confirmed, Mathews could be forced to undergo counseling or lose his job, among other possible consequences, said brigade commander Col. Gwen Bourque.

“It’s completely unacceptable for [Canadian Armed Forces] members to participate in any activity or have any membership in a group or organization that the members know or should have ought to have known that is connected to criminal activities,” Bourque said Tuesday in a conference call with reporters.

“Every soldier must respect the dignity of all persons, at all times.”

Details of Mathews’ alleged activities were originally revealed by the Winnipeg Free Press, whose reporter went undercover posing as a white nationalist wishing to join the group. According to the report, Mathews has training with explosives.

Bourque also stressed that Mathews would only have access to explosives as part of sanctioned military exercises. She described his master corporal rank as a “junior” position within the Army Reserves but said he would’ve received leadership training and been in charge of a section of reserve soldiers…

(((Bernie Farber))), chair of the Canadian Anti-Hate Network, described The Base as an extreme right-wing North American hate organization.

It’s focused on growing its membership through recruitment and training for violence, he said.

“They consider the alt-right to be not extreme enough,” he said. “They are almost like a neo-Nazi death cult.”

It isn’t clear how many people belong to the group in Canada, but Farber said the size of the group isn’t necessarily the most important detail.

“It only really takes one or two very committed, ultra-violent individuals to create all kinds of havoc,” said Farber.

One of The Base’s stated goals is for members to get into the military in order to receive training and then spread that to others in their group, according to Evan Balgord, executive director of the Canadian Anti-Hate Network.

The Military Police Criminal Intelligence Section tracked incidents of racism and white supremacy within the CAF from 2013 to 2018. Less than one per cent of the military population was engaged in racist or hate-motivated activities, according to the military police.

Punishment for this type of behaviour ranges from counseling to career consequences, including dismissal and legal repercussions. The military said seven administrative reviews have been conducted related to extremism and racism, which has led to two individuals being released from the Forces.

So Matthews was arrested but committed no crime except perhaps a “thought crime” which apparently is treated far more seriously than an actual crime with an actual victim.

When police go to arrest a common rape suspect, do they surround his house with a SWAT team comprised of dozens of tactical warfare experts?  Need we ask?

Keep in mind that everything being alleged about this “hate group” comes to us from a self-appointed Jewish expert on “hate” — nowhere is there any attempt to be fair-minded about this group and see it in the most reasonable way.

This group is obviously not preparing to instigate violence; rather, it is preparing to defend themselves and their families when the anti-White violence perpetuated by the Bolsheviks who occupy the Comintern in Ottawa reaches critical mass, and to not prepare for it is the height of foolishness.

Those like Matthews who oppose this destruction of Canada and the replacement of those who built it are dangerous “enemies of the people” who will be diagnosed as mentally ill and given remedial “counseling” or “re-education” per the model of the “former” Soviet Gulag system. 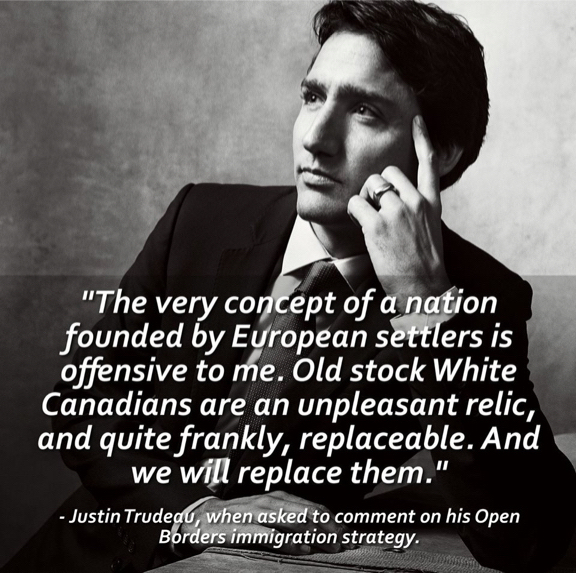