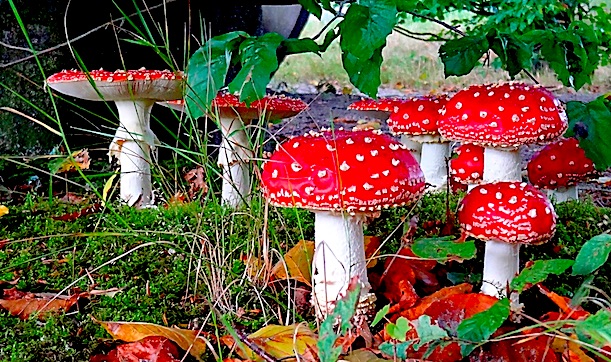 Migrants have found themselves headed to hospital emergency rooms in the Netherlands in record numbers after eating poisonous wild mushrooms that the native Dutch know well enough to avoid:

So far this year, 28 people have become ill in the Netherlands after eating self-picked mushrooms. A significant increase compared to last year, when around 11 people contracted mushroom poisoning, AD reports based on figures from the national poisons information center NVIC.

The vast majority of the poisoning incidents happened in October, after mushrooms started growing en masse. By September, there were only nine cases of mushroom poisoning.

The NVIC partly attributes the increase in poisoning incidents to the excessive number of mushrooms growing this year. This is due to the ideal weather conditions – rain after a warm summer caused high humidity.

A large proportions of the patients are not from the Netherlands. According to the NVIC, this may be because they confused mushrooms that grow in the Netherlands with an edible variety from their own country.

The NVIC advises against eating mushrooms you pick yourself, especially if you are visiting another country.

It’s laughable how the politically-correct press in the Netherlands tip-toes around the obvious problem here and absolutely refuses to acknowledge that Third World migrants are poisoning themselves because they do not belong there.

This article tries very hard to make it sound as if it’s run-of-the-mill tourists who are contributing to this problem, but it’s hard to imagine a White tourist in Amsterdam taking a day trip out into the countryside to pick and eat wild mushrooms.

Low IQ people, of course, are notoriously attracted to colorful and pretty things, like pink Cadillacs and poisonous Amanita Muscaria mushrooms (shown above) which commonly grow wild in the Netherlands.

Not only is “diversity” devastating for White countries like the Netherlands, it’s clearly dangerous for the non-White invasive species who come from primitive civilizations that are literally thousands of years behind us.  Mixing the two is like oil and water, iron and clay.  God created the races to live separately, and when we violate His will, the outcome is poisonous.

“But I have said unto you, Ye shall inherit their land, and I will give it unto you to possess it, a land that floweth with milk and honey: I am the LORD your God, which have separated you from other people.”
—Leviticus 20:24