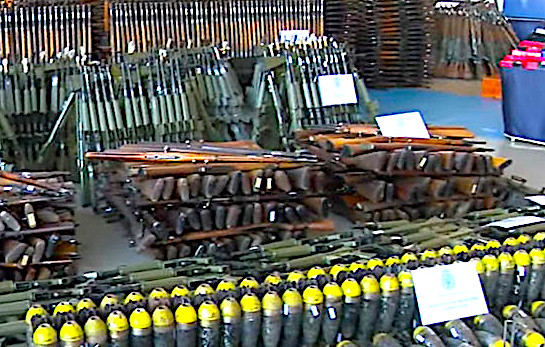 At the same time Customs officials in Denmark announced a ten fold increase in illegal weapons seized, authorities in the Netherlands revealed that record amounts of cocaine are arriving in Rotterdam for distribution across western Europe:

The last three years have seen a seven-fold increase in the number of illegal weapons seized by the Danish Customs Agency (Toldstyrelsen).

The agency has clamped down on the area, an important measure according to tax minister Morten Bødskov.

“Recent years have seen customs officers at the border and the airport register a consistent increase in illegal weapons. That is evidence of a big problem which we must come down hard on,” Bødskov said.

The trend appears to be continuing this year, with 9,400 illegal weapons seized in the first nine months.

In addition to increasing the number of customs officers, better equipment for scanning parcels has contributed to the results.

Meanwhile, in the Netherlands organized migrant gangs are bringing in record amounts of cocaine:

Even with nearly two months left to go in the year, authorities at the Port of Rotterdam this year have already surpassed the record amount of cocaine caught there in 2018, according to an investigation by De Telegraaf. Some 23 thousand kilograms of cocaine was intercepted at the largest port in Europe, a 28 percent increase over the 18 thousand kilograms captured during all of last year.

The Rotterdam office of the Public Prosecution Service (OM) confirmed this year’s drug trafficking spike, the newspaper said. More batches of the drug were seized en route to Rotterdam, like at ports in Belgium, the Telegraaf said. Rotterdam’s mayor was pushing for even closer cooperation by staffing Dutch investigators to work alongside officials in Central and South America.

All told, Rotterdam authorities have ferreted out over 500 kilograms of cocaine in at least 15 different shipments this year, the newspaper said….

A source close to the newspaper expressed concern over the rapid hiring of new customs officials set to work at the port as a precautionary measure against Brexit. New officers previously had to work for three years in other customs checkpoints, follow a four-month course in surveillance techniques, and a six-month trainee-ship at the port before being staffed there.

Now, the 900 new employees are likely to receive just three weeks of firearm and self defense training, the Telegraaf’s source alleged. The protection and safety of these workers is a top concern.

What Customs officials seize represents only a small fraction of the drugs and weapons that successfully get through.  Drug dealers accept these seizures as just a small “tax” on doing business.

As we have previously reported, with the flood of Third World migrants, Europe has also been hit with a literal “tsunami” of cocaine.

For the police, the seizures provide an opportunity to mislead the public into believing that something is actually being done to slow down this violent drug and gun trafficking problem.

Besides weapons and drugs, a record number of grenades is also flooding into western Europe, and bombings have become an every day occurrence in countries like Sweden and the Netherlands.

Luckily for the criminals and drug gangs, citizens of the EU are still overwhelming against private gun ownership, which means that only violent migrants and the under-manned police forces have guns.  Now, if only the police can just convince these violent criminals to turn in their illegal guns and grenades — then this experiment in diversity can finally succeed.