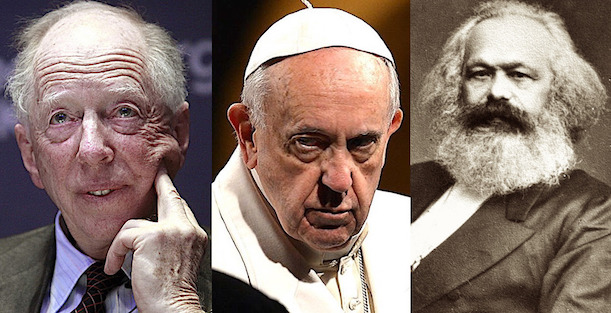 The Council for Inclusive Capitalism with the Vatican (“the Council”), a historic new partnership was launched today between some of the world’s largest investment and business leaders — most notably the Rothschilds — and the Vatican:

It signifies the urgency of joining moral and market imperatives to reform capitalism into a powerful force for the good of humanity. Under the moral guidance of His Holiness Pope Francis and His Eminence Cardinal Peter Turkson, who leads the Dicastery for Promoting Integral Human Development at the Vatican, and inspired by the moral imperative of all faiths, the Council invites companies of all sizes to harness the potential of the private sector to build a fairer, more inclusive, and sustainable economic foundation for the world.

The Council is led by a core group of global leaders, known as Guardians for Inclusive Capitalism, who meet annually with Pope Francis and Cardinal Turkson. These leaders represent more than $10.5 trillion in assets under management, companies with over $2.1 trillion of market capitalization, and 200 million workers in over 163 countries.

The organization challenges business and investment leaders of all sizes to embrace the Council’s guiding principles and make public commitments to act on them. These collective actions are intended to lead to systemic change by making capitalism a greater force for inclusivity and sustainability. Watch a video of the Guardians discussing the Council’s mission here.

Speaking to the Guardians, Pope Francis said, “An economic system that is fair, trustworthy, and capable of addressing the most profound challenges facing humanity and our planet is urgently needed. You have taken up the challenge by seeking ways to make capitalism become a more inclusive instrument for integral human wellbeing.”

The Guardians have already committed to hundreds of measurable actions, and Council members will make ongoing commitments to continue to advance inclusive capitalism. They will be accountable for their public commitments and invite businesses around the world to join. View the full list of actions being taken here.

“Capitalism has created enormous global prosperity, but it has also left too many people behind, led to degradation of our planet, and is not widely trusted in society,” said Lynn Forester de Rothschild, Founder of the Council and Managing Partner of Inclusive Capital Partners. “This Council will follow the warning from Pope Francis to listen to ‘the cry of the earth and the cry of the poor’ and answer society’s demands for a more equitable and sustainable model of growth.”

So there you have it — the world’s wealthiest banking dynasty — the Rothschilds — openly promoting world communism — but rest assured, it won’t be their enormous wealth that is redistributed — it will be yours.

For those who understand real history, elite Jewish bankers have been funding communism now for over 150 years — Jacob Schiff personally financed the Bolshevik Revolution in Russia in 1917.

And the Rothschilds provided funding to Karl Marx to write “his” “Communist Manifesto”….

Marx contrived both communism and capitalism as part of a false dialectic — opposites of the same coin — that ultimately would be synthesized into one common world system controlled by the banking elite.

All wealth would be consolidated into their hands to be “redistributed” fairly and “equitably” — meaning not at all.

And the 501c3 tax-exempt churches have all been infiltrated and subordinated to promote this agenda.

They would like you to believe that these rapacious bankers actually care about the “cry of the poor” and “inclusivity” — that’s what they always promise but never deliver — what they deliver is misery for everyone but themselves and their Judas Goats.

This is why the Vatican under Pope Francis has become an outspoken critic of nationalism and promoter of Third World migration — so that the massive transfer of wealth into the coffers of the Rothschilds can be done under the credible guise of Christian “charity”.

And the so-called “Green Revolution” is a vital instrument of this “Great Reset” — both the Vatican and the Rothschilds are working hand-in-hand to make sure everyone goes along with it –whether they like it or not.