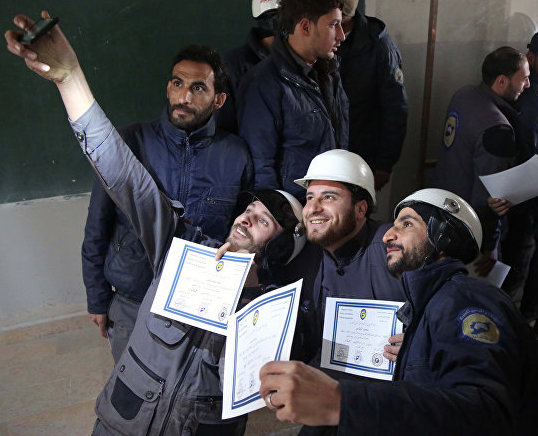 Maxim Grigoriev, Russia’s envoy to the U.N., is claiming that he has overwhelming evidence that the so-called White Helmets are not a “rescue group” but rather an ISIS-affliliated terror group involved in all kinds of illegal activities:

Praised in the West as humanitarian rescue volunteers, in reality the ‘White Helmets’ work with Islamist militants in Syria, harvest organs from the victims they pretend to be “rescuing,” stage false chemical weapons and other attacks for cameras, and loot the bodies and homes of Syrians killed and injured in the war, according to Maxim Grigoriev, director of the Russia-based Foundation for the Study of Democracy.

Grigoriev presented the results of the Foundation’s research into White Helmets at the UN headquarters in New York on Thursday. Russia’s envoy to the UN, Vassily Nebenzia, said the evidence shows the group is dangerous.

“The White Helmets deserve to be on the United Nations’ designated terrorist list,” Nebenzia said.

Rather than volunteers, almost all the members of White Helmets were paid staff, Grigoriev explained. There is also “undeniable evidence” that the group has been taking written orders from Jaysh al‑Islam, an Islamist militant group most notorious for its occupation of Douma.

It was in this suburb of Damascus that the White Helmets staged the “chemical attack” that served as the pretext for French, UK and US missile strikes against the Syrian government in April this year.

“Falsification of chemical attacks was an essential part of the White Helmets’ activities,” Grigoriev testified, adding that the group also regularly engaged in “making fake news and organizing staged rescues.”

He cited a particular example of a place called Jisr al‑Haj in Aleppo, where the militants had set trash on fire, brought bodies from the local morgue, and had the White Helmets film a staged rescue. Grigoriev cited a testimony by a member of the White Helmets, who also said that everyone involved received an extra $50 for the effort.

Many local residents interviewed for the research spoke about people “rescued” by the White Helmets ending up dead, with their internal organs missing. One of the witnesses interviewed was a former member of Ahrar al-Sham, who testified that his commander Shadi Kadik, also known as Abu Adel Al-Halabi (of Aleppo), acknowledged the organ harvesting. The total number of cases involving organ theft is “at least several hundred” in Aleppo alone, Grigoriev testified.

Instead of rescuing civilians and children, the White Helmets looted homes damaged in the fighting and bodies of the dead, while forcing the children out of schools and kindergartens to set up offices there.

“At a rough estimate, out of 26 centers operating in Eastern Ghouta, ten were located in schools and one in a kindergarten,” Grigoriev cited from the testimony of a Syrian journalist in the area.

…The Foundation is a member of the Global Counter-Terrorism Research Network established in 2013 by the UN’s Counter-Terrorism Committee Executive Directorate. Its report is based on interviews with over 100 eyewitnesses, including 40 members of the White Helmets, 50 local residents and 15 former terrorist and militant fighters. More than 500 local residents were also surveyed in Aleppo and Deraa.

A number of Western countries, such as the UK and Canada, have proudly announced they would be accepting White Helmets as refugees, after several hundred members of the group were evacuated from a jihadist-held enclave in southern Syria ahead of the advancing government troops.

The government in Damascus considers the White Helmets to be in the same category as illegal militias and terrorists.

It was well-established years ago that Israel controls the jewish-funded Mossad front like the White Helmets are involved in this illegal activity.  It’s also not surprising that the U.S. and Canada are allowing these White Helmet terrorists to immigrate to the West, considering that they have been heavily promoted as a fake “humanitarian” group by the pro-Israel, jewish-controlled press.

Of course, all of this evidence against the White Helmets will be dismissed by the jewish press as Russian “fake news” used to “destabilize” the situation in Syria, but that’s exactly what the White Helmets are doing in Syria — undermining the Assad “regime” at the behest of Israel.  With the U.S. allegedly pulling out of Syria, Israel will now have a greenlight to escalate the violence and terrorism their, using these White Helmets and ISIS as their proxy warriors.