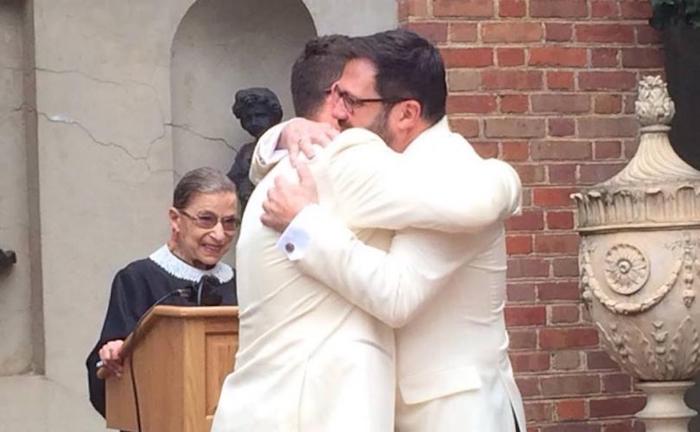 For the last 40 years, “Judge” Ruth Bader Ginsburg based her career on her hatred of traditional families and her promotion of deviancy and perversion, and so it comes as no surprise that a sodomite couple that she “married” are now accused of drugging and raping another sodomite:

That year, as a 23-year-old graduate student at Rice University, Schultz says he met opera countertenor David Daniels and conductor Scott Walters at a closing night party for Houston Grand Opera’s run of “Xerxes.” According to his complaint, they invited him back to the apartment they were staying in for drinks, where he blacked out after just a couple sips.

…Schultz admits he did not seek an examination until after physical evidence of rape would have disappeared, but friend Megan Gale (then a Rice University music department employee) and an unnamed therapist both confirmed to the paper he confided in them about the alleged incident at the time, including sharing specific details.

“I was not willing to risk a career in opera by exposing this truth. But I know that I am not alone. My love for life and art and music and people compel me to tell this truth,” Schultz wrote in a July essay that first announced he was raped, though he did not name the accused at the time. He said the #MeToo movement emboldened him to speak up.

Since then, he told the Daily News, Daniels obtaining Tenure at the University of Michigan, where he would be in close contact with other young singers, convinced him to go fully public and file a complaint with university police. The school PD’s special victims unit forwarded the allegations to Houston police, who would confirm only that an investigation is active.

Daniels and Walters both gave statements to the Daily News denying the allegations. The University of Michigan, where Daniels has taken a leave of absence, and the Houston Grand Opera both said they will review the allegations, as well.

In their own publications, Jews have bragged about leading the charge for gay marriage, but if we point that out, we are accused of “antisemitism”.

If you need proof, here’s a jewish writer, Amy Dean, admitting Jews are behind gay marriage in a jewish publication: Amy Dean, “How Jews Brought America to the Tipping Point on Marriage Equality: Lessons for the Next Social Justice Issues,” published Tikkun, March 16, 2014.

The average homosexual marriage lasts no more than two years — proof that homosexuals have no interest in being married, which makes sense because the purpose of marriage is to create children and raise them in a stable, loving home.  Gay marriages are sterile and produce nothing but violence and death, often through suicide.  This is the vision of the New America that makes Supreme Court Justice Ruth Bader Ginsburg smile.