SA Black Army Officer: Even Anti-Apartheid Whites Will be Tortured and Murdered 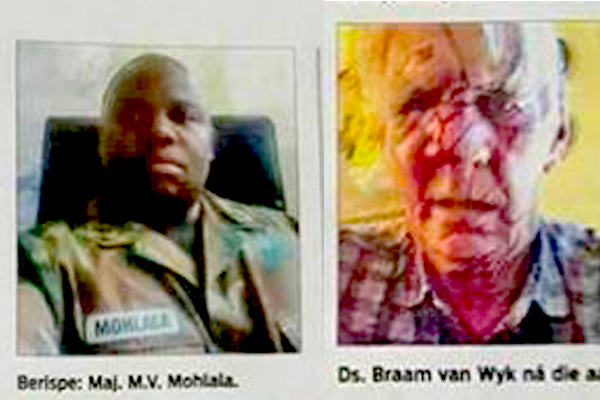 A high-ranking Major in the South African Defense Force came under attack for disparaging remarks he made about an 80 year old white man who was beaten by Blacks, suggesting that he should have been tortured before he was murdered:

The South African National Defence Force (SANDF) doesn’t really make the news that often these days. When they do, it’s not normally a good sign, one way or the other.

Over the weekend, social media comments made by Major Mohlala caused quite a stir. The comments involved Mohlala referring to white South Africans while reacting to a photo of a badly beaten 80-year-old man.

According to the Democratic Alliance’s (DA) Shadow Minister of Defence, Kobus Marais, Mohlala is from the Signal Formation at the Wonderboom-Military Base in Pretoria.

In his comment, Mohlala called on the man in the photo’s attackers to go one step further.

“Should actually have poked out his eyes and tongue so that the last people he would ever see, were the killers and he could go to his grave with the nightmare.”

“Apartheid is in him. All of these old white people think we are stupid when they say they were opposed to apartheid. We will not forget what they have done. Now it is the white people’s turn.”

Marais has said that his party will write to the Minister of Defence to request that she investigate the allegation of “hate speech and race-based incitement of violence”.

The DA has labelled the remarks “simply unacceptable” given Mohlala’s position.

Marais believes that the Major has currently “only received a warning of future disciplinary action”.

“This is simply not enough given the seriousness of his breach of non-racialism and respect for human dignity. Minister Mapisa-Nqakula must initiate the appropriate disciplinary processes against Major Mohlala, urgently.”

“Major Mohlala has the privilege of serving in our armed forces. His mandate is to protect our nation, not to add to the high levels of crime or promoting violence and racial hatred.”

The DA also intends to report the incident to the South African Human Rights Commission (SAHRC) for further investigation.

This is an example of “diversity” with its mask off — despite all the public platitudes of a peaceful tranformation in South Africa, the Blacks want — and will settle for nothing less than — blood.  The Jews in South Africa have been stoking this racial hatred in the hearts of Blacks for the past 50 years, and now they are chomping at the bit, waiting for the greenlight to unleash their  fury.

And this should also be a wake up call to so-called liberal “anti-Aparteid” Whites — if you think for a second that Blacks are going to spare you because you supported their cause, you will be dead wrong — literally.  As the Major pointed out, Blacks have no sympathy for these useful idiots — the Whites who fought for the Black cause.

Black rage will not discriminate — it will be an equal opportunity offender.